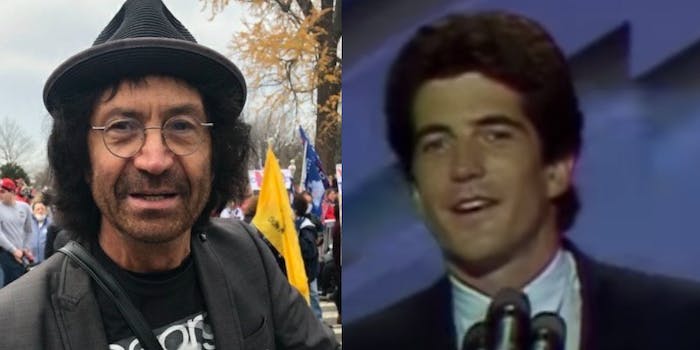 Vincent Fusca has become a folk hero among conspiracy theorists.

The internet collectively mocked conspiracy theorists on Saturday after learning that followers of the QAnon movement believe JFK Jr. is still alive. Not only that, the group is convinced that the deceased man actually walked amongst them over the weekend.

The incident unfolded as supporters of President Donald Trump descended on Washington, D.C., to protest the outcome of the 2020 election, which they incorrectly claim was plagued by widespread voter fraud.

As noted by Daily Beast journalist Will Sommer, a man named Vincent Fusca, who conspiracy theorists believe is the deceased son of former President John F. Kennedy, was also in attendance.

“Vincent Fusca — the man many QAnon believers claim is JFK Jr in disguise — is here,” Sommer tweeted. “People are shouting ‘JFK’ at him and asking for selfies.”

Despite the fact that JFK Jr. died in a plane crash in 1999, QAnon followers are convinced that the death was actually faked and that JFK Jr. will reemerge and join Trump to rule the nation.

The mere reference led conspiracy theorists to invent an entire lore surrounding JFK Jr. that still persists to this day. QAnon followers have predicted multiple times that JFK Jr. would appear at a Trump rally to take his place next to the president. Unsurprisingly, none of the predictions have come true.

Fusca himself was designated JFK Jr. after appearing in the crowd behind the president at numerous rallies.

While the JFK Jr. conspiracy has been connected to the QAnon movement for some time, internet users who first became aware of Fusca on Saturday couldn’t help but laugh.

“The deplorables have tried my patience for years, but implying that JKF Jr. would have aged this poorly is a whole new level of deplorable!” @TomDangora wrote.

Many users expressed total astonishment that even a group as fringe as QAnon could espouse such a ridiculous belief.

QAnon believers say there’s a logical explanation as to why Fusca, who lives in Pittsburgh, looks absolutely nothing like JKF Jr. Fusca, or so the conspiracy goes, was forced to change his appearance with plastic surgery to remain undetected—while simultaneously showing up to Trump rallies and commanding an impressive Twitter following.

What Fusca will do when Trump leaves office in January—an inevitability that QAnon supporters have yet to accept—remains to be seen. Given that the QAnon movement continues to persist despite an endless stream of failed predictions and nonsensical claims, Fusca will likely remain a coveted figure among conspiracy theorists even once Trump vacates the White House.