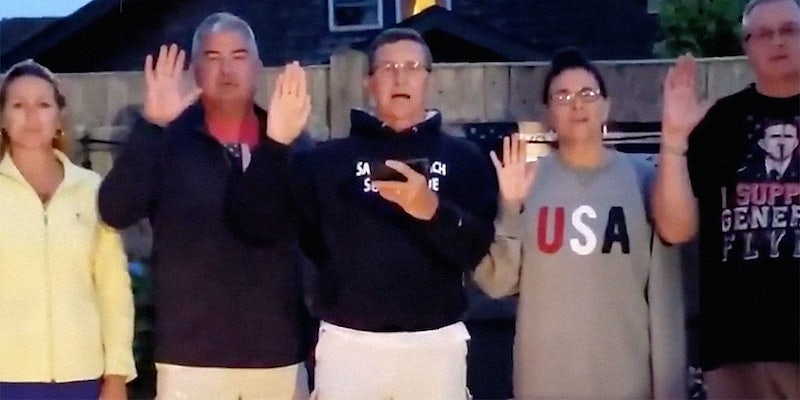 The Flynn family is suing CNN for defamation for airing the footage.

Relatives of former national security adviser Michael Flynn have claimed that footage of them reciting the “QAnon oath” is actually just an unrelated family tradition.

The claim, as reported by VICE News on Wednesday, is part of a $75 million defamation lawsuit filed by Flynn’s brother and sister-in-law against CNN.

The news network in early February aired footage of Flynn and members of his family reciting the oath, which was originally uploaded to Twitter by Flynn himself on Independence Day in 2020.

The oath includes the phrase “Where we go one, we go all,” a popular saying among supporters of the QAnon conspiracy theory. The oath was originally posted online by “Q,” the unknown figure behind the conspiracy theory, less than two weeks before Flynn uploaded the footage to YouTube.

The Flynn family has claimed that CNN falsely associated the footage with QAnon and further argued that the oath wasn’t an oath at all, despite Flynn’s original Twitter post including the hashtag #TakeTheOath.

“It was not an oath of allegiance to QAnon, or any kind of oath at all. It was a simple, family, July 4 statement of support for each other,” the court filing states.

Followers of QAnon hold Flynn in high regard and believe the retired general is secretly working with former President Donald Trump to topple a global cabal of child-eating pedophiles.

Even though Flynn has gone as far as to speak at QAnon events, his family’s lawsuit claims that associating them with QAnon is akin to labeling them as “Nazi sympathizers.”

“Accusing the Flynns of being ‘QANON FOLLOWERS’, even for a few seconds, is no different than accusing them of being Nazi sympathizers. It is common knowledge that Nazis, white supremacists, and adherents of QAnon are violent extremists,” the lawsuit states. “That is the connection that CNN intended and did make in the minds of viewers. To imply that a person is a Nazi sympathizer or a ‘QANON FOLLOWER’ is the same thing.”