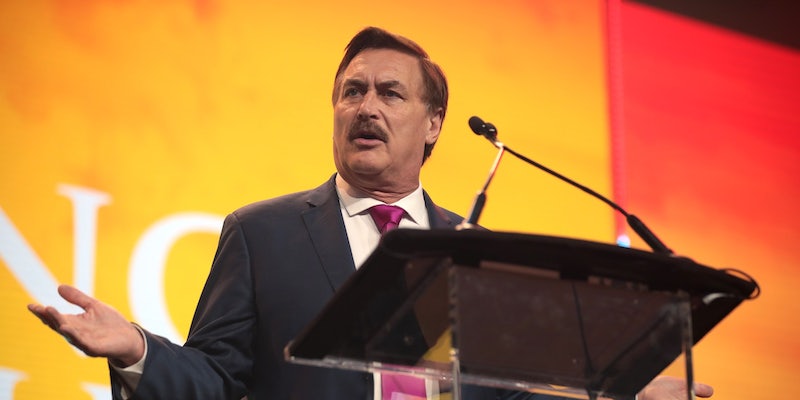 SlickRockWeb's efforts to attend Lindell's Cyber Symposium to collect the award have been fruitless.

Last month, Mike Lindell offered a $5 million award to anyone who could disprove his election fraud claims. Now a tech company says that he won’t take the evidence it compiled to claim the prize.

Lindell has become one of the most public faces of the lie that the 2020 election was stolen from former President Donald Trump. The My Pillow CEO has spent months—and millions—furthering these claims, for which he’s also being sued for $1.3 billion by Dominion Voting Systems.

Many assumed that Lindell’s $5 million offer was disingenuous. Not Eric Ellason, chief executive officer of SlickRockWeb, a company that provides search engine optimization and other internet-based services.

On Tuesday, Ellason tweeted that his company had put together a team of digital forensic experts to disprove Lindell’s claims in the hopes of collecting the $5 million. “We are officially rising to that challenge,” Ellason wrote.

He included a link to their report debunking Lindell’s oft-repeated accusation that China and Iran interfered with the election via Dominion voting machines.

It wrote that Dominion allowed its previous web address to expire, and it was later purchased on the open market by a Chinese company. This innocuous fact, the report states, has been exploited as evidence of the so-called fraud. According to the report, a screenshot of a 2011 web archive showing Dominion’s current website rerouting from its prior one, along with evidence that the latter is now owned by a Chinese company, has underpinned many viral claims that the Chinese interfered in the election.

“At the time in 2011 historical WHOIS/domain registration records retrieved from RiskIQ clearly show that both domains were in fact registered and owned by Dominion Voting Systems,” it states. Yet election fraud claims “neglect to mention … that Dominion Voting Systems let the ‘dominionvotingsystems.com’ domain expire in 2014 and no longer owned, used or controlled that domain in 2020 much less in any of the years after they let the registration lapse.”

The report states that no real evidence has been offered to prove Lindell’s “nonsensical” claim that Iran interfered in the election. It also references detailed analysis by the creator of the OSINT (open source intelligence) tool Spiderfoot, which Lindell and his cohorts have used to “prove” fraud, demonstrating how he misused it.

Upon completing the report, Ellason tweeted that he tried to find out how to attend the Cyber Symposium Lindell is hosting this week, a prerequisite to collect the award.

“We attempted on multiple occasions to make contact with Mike Lindell and/or his associates via email, his website Frankspeech dot com and on Twitter,” Ellason tweeted, “Included is our inquiry and the response we finally got back that did not contain the link or information it said it contained.”

Ellason included a screenshot of their email to Lindell, and the reply they received. The reply doesn’t offer any information on how to attend the symposium, which is being held in South Dakota.

They haven’t given up yet.

“We look forward to demonstrating that some of these claims of election fraud in the November 2020 election are not accurate and are based in fundamental misunderstandings in how OSINT analysis and tools can be applied to the data,” Ellason said in a release.

On Wednesday, Ellason told the Daily Dot that they may have “way over estimated what Lindell might have even had …… and it was a very low bar to begin with.” He said they thought Lindell could’ve received unofficial election night data, which wouldn’t have been a “smoking gun,” but would’ve at least had some basis in fact. Now, he said via Twitter message, they believe Lindell may have been duped.

“…[I]t is now looking more and more like Mike Lindell was scammed himself and given large volumes of nonsense data,” Ellason said.

“The Big Lie has now devolved into con men conning other con men,” he added.

On Wednesday morning, Lindell bragged that the crowd of dozens attending the Cyber Symposium included both Democrats and Republicans. Neither Ellason nor anyone from his team is among them.