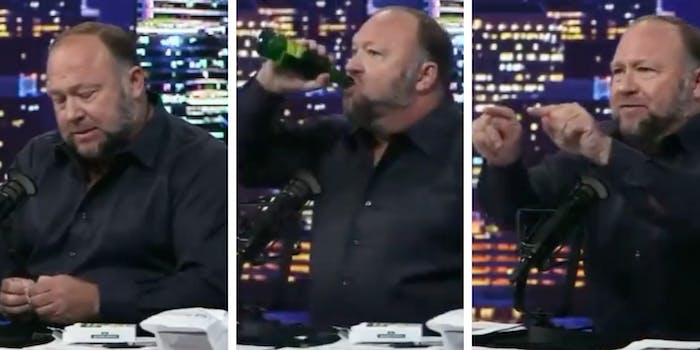 Ivermectin is not an approved or effective treatment for COVID-19.

America’s leading conspiracy theorist Alex Jones seemingly ingested a tablet of the antiparasitic pill ivermectin on Friday’s episode of InfoWars. Ivermectin is being pushed by conservatives as a treatment for COVID-19, overwhelming already reeling hospitals in the process.

“You creep up on them with a poison injection dressed up in a lab coat. You little Josef Mengele Nuremberg Code violating monster. You damn monster,” Jones said in reference to Dr. Anthony Fauci while swallowing the tablet with a bottle of Topo Chico.

Ivermectin is typically used on pets and livestock as a dewormer. In humans, it is used as a treatment for river blindness and parasites. It has not been approved by the FDA for treatment or prevention of the coronavirus. An overdose of ivermectin can cause nausea, vomiting, diarrhea, low blood pressure, allergic reactions, dizziness, problems with balance, seizures, coma, and even death.

“Nobel prize-winning for humans!” Jones chanted after taking the dewormer.

William Campbell and Satoshi Ōmura, the discoverers of ivermectin in 1975, were awarded the Nobel Prize in 2015 for the medicine’s success in treating parasitic infections.

Merck, the pharmaceutical company that is responsible for distributing the drug, released a statement on the use of ivermectin as treatment for COVID-19 in February 2021. It said that there is “No scientific basis for a potential therapeutic effect against COVID-19 from pre-clinical studies.”

Some viewers questioned whether Jones actually took the pill or was just pretending for show.

Jones later referenced Joe Rogan, former Fear Factor host turned-podcaster who recently tested positive for COVID-19 after advocating against taking the vaccine. Rogan also claimed that ivermectin was a cure for the coronavirus.

“That’s why Joe is worth $300 million dollars, yeah he’s real stupid. That’s why he lives in a $60 million dollar house on the river. You leftists taking all the shots and dying are the dumbasses.” said Jones.

In late June, Associated Press reported that nearly all COVID-19 deaths in the U.S. were among unvaccinated people.