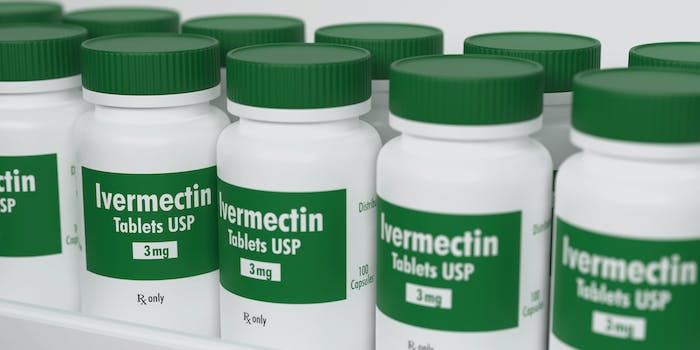 Some conspiracy theorists opposed to the COVID-19 vaccine appear to be giving themselves diarrhea due to an animal deworming drug that they believe defeats the virus.

A private Facebook group dedicated to Ivermectin, an anti-parasite drug often used for livestock such as cows and horses but also has legitimate medical uses for humans, has been filled with accounts from users who say it caused them significant intestinal problems.

As noted by researcher Aric Toler, one user who had been taking Ivermectin on-and-off stated that he had experienced diarrhea after every dose.

“I get strong diarrhea for about a day, each time I take my 15 mg dose,” the man wrote. “This has happened with each two-week dose, now, since January.”

Another user claimed that he was prescribed Ivermectin by a doctor online, which left him running back-and-forth to the toilet.

“Today I am running to the bathroom, and it’s not to pee,” the user wrote.

To make matters worse, the online doctor reportedly stopped responding to his messages regarding the side-effects.

Users appear to either be buying the drug from their local stores or relying on the version of the drug designed for humans—used to combat parasitic diseases—from a telemedicine website run by pro-Trump doctors.

Due to the drug’s bad taste, some users have even questioned whether the drug can be ingested through other orifices.

“Can I squeeze the paste into my anus instead of my mouth?” another user asked. “It tastes terrible.”

Other screenshots from the group also show users responding to questions about whether a pregnant woman can take the drug by suggesting that she immediately visit Walmart or an animal feed store to buy “the cattle version.”

Ivermectin has become the latest go-to drug for those opposed to the vaccine after one study suggested that it could quickly kill the virus. But the study, which was only carried out in a laboratory setting, did not involve human patients.

Doctors have warned that much more research is needed to determine the drug’s effectiveness for COVID-19.

Sometimes, even the most confident lovers need a boost. That’s where Dame’s Pillo comes in. The sexual wellness company has created an amazing sex pillow that supports couples from every angle. Here are a few of its standout features:

-Back friendly: Pillo is comfortable yet structurally firm, which allows you to try new positions or elevate familiar ones.

-Soft AF: It’s got a 100% cotton shell with soft foam, so it’s a great pillow in and out of sex. It’s even laptop friendly when you’re chilling in bed or working remotely.

-Artful subterfuge: It’s low-profile and blends into any bedroom or bed. After all, it’s just a pillow, but with an edge.

Aside from its features in the bedroom, Pillo is as easy to clean as it is to use. Get ready to take couples play to new heights with Pillo, available on Dame for $95.

The Ivermectin craze is similar to what was seen during the early days of the pandemic with hydroxychloroquine, an anti-malaria drug touted by former President Donald Trump.

Despite scant evidence supporting its use for COVID-19, the drug was highly sought by anti-vaxxers as a miracle cure.

The concern over Ivermectin has grown so much that the FDA recently released a statement warning people to stop buying the drug from farm supply stores.

“You are not a horse. You are not a cow,” the FDA tweeted. “Seriously, y’all. Stop it.” (The FDA also notes that diarrhea is a side effect of using the drug).

Although Ivermectin is available in pill form to treat parasitic worms in humans, the animal version being used by some people is highly concentrated and can be toxic.

States such as Mississippi have since reported a spike in calls to poison control centers due to Ivermectin, noting that 70% of all calls are related to the drug.

The University of Oxford is currently attempting to learn whether Ivermectin can be beneficial in combating COVID-19 by conducting actual trials for the drug.

While it may seem shocking that someone would be willing to take an animal dewormer but not a vaccine that has been administered to billions of people, many conspiracy theorists believe that miracle drugs are being kept secret from the public.

That belief explains in part why so many conspiracy theorists are willing to drink bleach or rely on other unproven drugs to combat COVID-19.