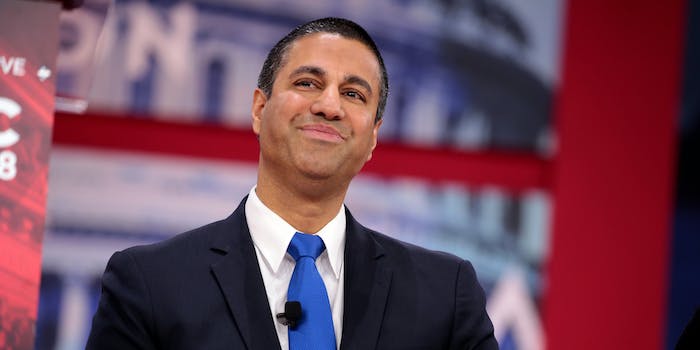 Pai's decision faced immediate pushback from other members of the FCC, senators, and advocacy groups.

Federal Communications Commission (FCC) Chairman Ajit Pai defended the agency’s repeal of net neutrality rules on Monday, and said the agency will vote this month to affirm that it addressed concerns raised by a federal court about the repeal.

The chairman’s defense of the repeal was blasted by net neutrality advocates.

Pai, in a blog post, criticized concerns raised by net neutrality advocates and said that he has circulated an order for the FCC’s October meeting addressing the issues flagged by the United States Court of Appeals District of Columbia Circuit in last year.

The court’s ruling stemmed from Mozilla v. FCC, which challenged the agency’s repeal, called the “Restoring Internet Freedom Order.” The court upheld most of the repeal, but also vacated a portion of it that blocked states from enacting their own net neutrality laws.

The court’s decision also asked the FCC to reexamine how the repeal would impact public safety, utility pole regulations, and the Lifeline program, which subsidizes internet service for lower-income Americans.

Those issues were open to public comments, which the FCC agreed (only once) to extend the deadline of despite states urging them to give them more time while dealing with the coronavirus pandemic.

In the blog post, Pai says despite those issues, his order will stand by the Restoring Internet Freedom Order. An FCC spokesperson told Reuters that the order would not propose any policy changes to address the court’s issues.

“I have circulated an Order for consideration at our October meeting addressing the points raised by the D.C. Circuit. It affirms that the FCC stands by the Restoring Internet Freedom Order, consistent with the practical reality consumers have experienced since December 2017 of an internet economy that is better, stronger, and freer than ever,” Pai wrote.

Pai’s order appears that it will be up before the FCC on Oct. 27, just a week before the presidential election.

The chairman’s decision was soundly criticized by other members of the FCC, senators, and advocacy groups.

“This is crazy. The internet should be open and available for all. That’s what net neutrality is about. It’s why people from across this country rose up to voice their frustration and anger with the Federal Communications Commission when it decided to ignore their wishes and roll back net neutrality,” Rosenworcel said in a statement. “Now the courts have asked us for a do-over. But instead of taking this opportunity to right what this agency got wrong, we are going to double down on our mistake.”

Meanwhile, Sen. Ed Markey (D-Mass.), who has championed the Senate version of the Save the Internet Act, a bill that would restore net neutrality rules, said the FCC was failing to course correct.

“At a time when the coronavirus pandemic has made us more dependent than ever on broadband and wildfires are devastating the west, we need the FCC to step up, not double down on its past failures to promote the public interest,” Markey said. “This fight will not end until we reverse the Trump FCC’s wrongheaded decision and put net neutrality back on the books.”

Free Press, an advocacy group that has pushed against the FCC’s net neutrality repeal, argued that repeal abandoned the agency’s authority over broadband which impacted public safety during the coronavirus pandemic.

“The FCC’s decision to forfeit its authority over broadband-internet service has undermined its ability to protect the Lifeline program, pole-attachment rights for competitive broadband providers, and public safety—a glaring abandonment during a pandemic that has students, workers and patients more reliant on the internet than ever,” Free Press Policy Manager Dana Floberg said in a statement.

“We’ll say it again and again: The best remedy for such harms would be for the Commission to once again correctly classify broadband as a Title II service, protected by strong open-internet rules, and to take steps to ensure that broadband is truly available and affordable for everyone.”