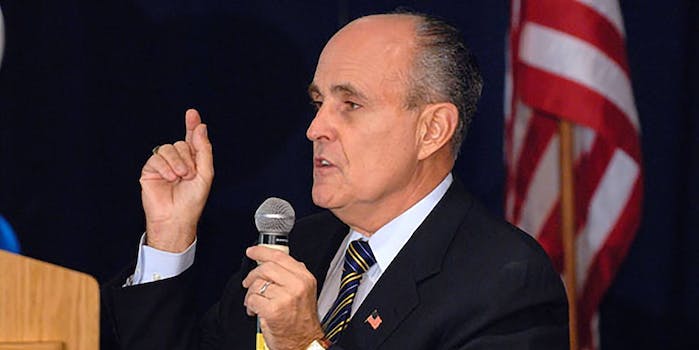 Rudy Giuliani on Donald Trump’s terrorism plan: ‘anything is legal’ in a war

Former New York City mayor Rudy Giuliani talked about the 9/11 anniversary on ABC's 'This Week,' and insisted that 'anything is legal' during a war.

On the 15th anniversary of the terrorist attacks of September 11th, 2001, former New York City mayor Rudy Giuliani sat down for an interview with George Stephanopoulos on ABC’s This Week, to remember the cataclysmic events of that day. However, despite saying that he didn’t want to talk politics on such a solemn anniversary, he ultimately ran a little defense for the Trump campaign. Giuliani’s statements culminated in a controversial defense of GOP nominee Donald Trump’s proposal to seize Iraq’s oil supply.

Stephanopoulos started off by asking Giuliani if he agreed that “by most measures, Americans are safer today,” a statement Giuliani only partially agreed. “I’ve always thought it was a mixed bag,” Giuliani explained:

“We’re safer in certain ways, we’re not as safe in other ways. And here’s the problem that we have: It’s always two wars, we’re always fighting the last war. Terrorists are even more cunning with that, we’re always fighting the last battle, the attack with the airplane. So yes, is our airplane safety much greater today? Absolutely. Is our cargo safety much safer today? Can’t tell you that.”

Stephanopoulos wasted little time in transitioning from a somber, largely apolitical question about the 9/11 anniversary to some more pointed questions about the American political season.

When Stephanopoulos asked Giuliani to respond to Democratic presidential nominee Hillary Clinton’s statement backtracking on her use of the phrase “basket of deplorables” to describe some Trump supporters, (she didn’t back away from the description itself, but said she regretted estimating the number at half of the) Giuliani initially balked:

“Today I’m not going to respond to that. I’ve never done politics on September 11, even when I was running for president. I actually think the nicest thing and the best thing to say about this campaign is, I know Hillary Clinton, I know Donald Trump much better, neither one of them is a racist. And for either one to say that means they’re getting a little too excited in their campaigning. They’re good people.”

Stephanopoulos wasn’t done asking political questions, however, and it soon became clear that Giuliani’s 9/11 morning prohibition on politics was more a matter of preference than iron-clad principle as he defended his candidate’s recent, warm comments towards Russian president Vladimir Putin. Specifically, Giuliani insisted that Trump didn’t praise Putin, claiming the presidential candidate will further “clarify it during the debate.”

“What he said was?and I really don’t want to talk politics, but let me just explain this… ‘just because he flatters me doesn’t mean he’s going to get a better deal,’” Giuliani said.

Giuliani went on to compare Trump’s relationship to Putin with former president Ronald Reagan’s relationship to former Soviet leader Mikhail Gorbachev. Before too long, his reluctance to talk politics almost completely faded away, as he went all-in on attacking the Obama administration’s official posture towards Putin’s Russia.

“[Trump] will be negotiating with Putin the way Reagan did,” Giuliani stated. “From a position of strength. Rather than the President who’s negotiating with him, to the extent that he does, they did over Syria, from a position of weakness. Running away from 12 red lines that he drew  in the sand, giving up the defense of Poland and the Czech Republic.” Giuliani concluded by claiming Putin “played Hillary Clinton and Barack Obama all over the world, not Donald Trump.”

When Stephanopoulos started to ask about Iraq and Syria, Giuliani laughed as he remarked “you’re gonna make me do this today,” but he didn’t balk at the further line of questioning. It ultimately produced what may be the most headline-grabbing, controversial comment of the whole morning, too ? while defending Trump’s “take Iraq’s oil” proposal, he asserted that anything is legal in a war, until that war is over.

Giuliani: "Of course" taking Iraq's oil would have been legal: "Until the war is over, anything is legal." #ThisWeek https://t.co/VR7lvCJAws

“Of course it’s legal! It’s a war,” Giuliani said with a chuckle. “Until the war is over, anything’s legal.” Needless to say, this is objectively untrue. Giuliani’s statement seems to imagine a world in which war crimes do not exist.

The former New York City mayor also accused the Obama administration of encouraging terrorist attacks by “going on defense.” By that time, he wasn’t responding to any direct question from Stephanopoulos.

“Of course it’s legal! It’s a war. Until the war is over, anything’s legal.”

You can say that he was pushed into firmly political territory by the host, but once he was there, he seemed entirely willing to indulge. He concluded by saying that Clinton’s promise not to use ground troops in Iraq and Syria meant ISIS knew she was a “patsy.”

All in all, Stephanopoulos spent a good deal more time asking Giuliani about hot-button political issues than he did about the 9/11 anniversary. And, however reluctant the former New York City mayor may have initially been to go there, he ultimately did so with aplomb.