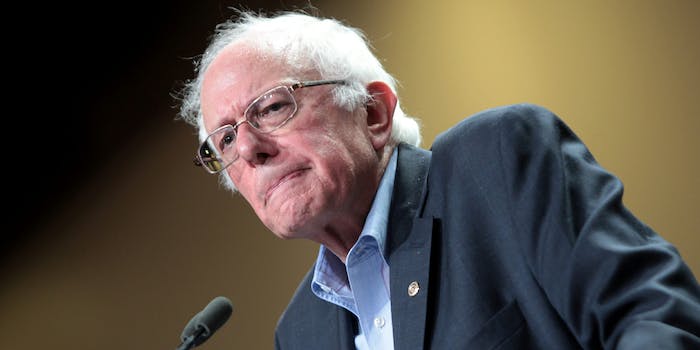 Voters of color, meanwhile, point to his dismissive comments about race.

Democratic presidential hopefuls have been dropping announcements left and right since the new year, and according to two sources who spoke to Yahoo! News, Bernie Sanders may soon be next.

The sources, who have “direct knowledge of his plans,” say that Sanders, who lost to Hillary Clinton in the Democratic presidential primary in 2016, was especially feeling good about a run because he recently polled as the most popular politician in the country and a leading Democratic contender.

“What the senator has this time that he didn’t have last time is he is the most popular elected official in the country right now,” the source told Yahoo! News. “That’s light years away from 2016 when very few people knew who he was.”

Also, pumping Sanders up: He was “heartened,” as Yahoo! put it, to see that he was a top candidate among Black and Latino voters—at least according to one poll.

While it’s no secret that the Democratic Socialist has a fired-up, hardcore base—and it’s not just white bros—this last part has marginalized people on Twitter scratching their heads. Just two days ago, a GQ interview dropped in which he made several tone-deaf remarks about race. For starters, Sanders emphasized, as he has before, that class, not race was the most important issue our country faces, trivializing the adversity endured by Americans of color.

In this GQ profile by @zengerle, Bernie Sanders emphasizes his viewpoint that class — not race — is the most important issue to tackle.

(He didn't say this in his MLK Day remarks in South Carolina this past Monday, by the way.) https://t.co/bXqyQfReG5 pic.twitter.com/obudoxD0FA

He also said his opponents “think that all that we need is people who are candidates who are black or white, who are black or Latino or woman or gay, regardless of what they stand for.” It’s a bit much to insinuate that a straight, cis white man is the best person to represent marginalized people without bothering to note there are things about their identities he may not understand. He is also ignoring that people of color, specifically Black and Latino voters, helped Democrats win the 2018 midterms, and were galvanized to vote because the playing field wasn’t as white and male as it usually is.

Bernie Sanders is not just attacking the current field of candidates who've already declared for the Democratic race, he's also dissing the diverse Blue Wave that helped Democrats retake the House in the 2018 midterms. https://t.co/Wa4Xlxttk4

Bernie: 'My Opponents' Want Black, White, Gay, Latino or Women Candidates 'Regardless of What They Stand For'

We just don’t want YOU. https://t.co/g4xZXPy8pN

Bernie Sanders: I’m running for president
Me, a woman with the knowledge that a pool of amazing women who are actual democrats are also in the race: pic.twitter.com/B4lSi6cQcr

Not that there aren’t people happy for another Bernie bid.

But, raising minimum wage benefits an abundance of black and brown workers, as does ending cash bail. https://t.co/N2eu4WuWAT

I'm a BLACK WOMAN, LIFE LONG DEMOCRAT VOTING Bernie Sanders 2020. #WealthClass Cheated Millions Of Voters In 2016 To Prevent A Bernie Type Presidency. All We Want Is #AFutureToBelieveIn. We're BACK FOR THE RE-MATCH. It's GONNA BE AWESOME GOODNESS COS WE'RE OUT TO #DumpTrump!

But maybe it’s just time for something new.

Sanders’ camp has yet to make an official announcement.