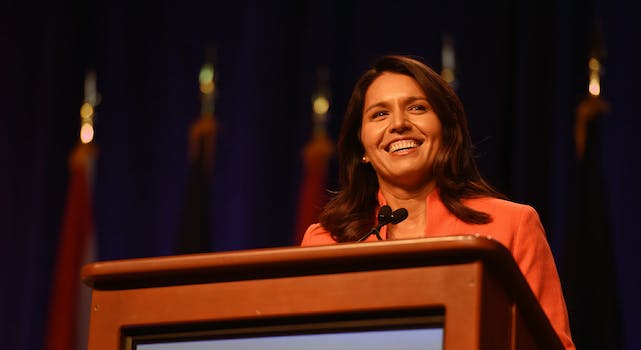 Mere hours after announcing her presidential bid on CNN, Rep. Tulsi Gabbard’s (D-Hawaii) campaign may have been sunk by anti-LGBTQ statements from her past.

The Hawaiian Democrat’s opposition to LGBTQ rights early in her political career has not been a secret per se, and the four-term congresswoman with White House ambitions has apologized for it in the past. But fervor was re-ignited on Friday when 2004 testimony by Gabbard about same-sex marriage—when she was a member of the state legislature—resurfaced.

At the time, Gabbard said, ”To try to act as if there is a difference between ‘civil unions’ and same-sex marriage is dishonest, cowardly and extremely disrespectful to the people of Hawaii.

“As Democrats, we should be representing the views of the people, not a small number of homosexual extremists.”

In the late 1990s, Gabbard, now 37, worked with her father Mike Gabbard, formerly a prominent anti-gay activist in Hawaii and today a member of the state house, on his political action committee, The Alliance for Traditional Marriage. The committee supported gay conversion therapy and referred to homosexuality as “unhealthy, abnormal behavior that should not be promoted or accepted in society.” According to CNN, it spent $100,000 assisting efforts to pass legislation opposing same-sex marriage in Hawaii in 1998.

Over the weekend, an ad by The Alliance for Traditional Marriage resurfaced of the Gabbard family opposing gay marriage in the late 1990s. In the video, the Gabbards liken same-sex marriage to incest, pedophilia, and bestiality.

“Each of us has the right to marry but we don’t have the absolute right to marry anyone we want. For example, I’m not allowed to marry my daughter or my son,” Mike Gabbard says in the video.

“I can’t marry my sister or my brother,” a young Tulsi Gabbard chimes in. The commercial concludes with the elder Gabbard saying, “Don’t open the door to weird marriages. Don’t let homosexuals force their values on the people of Hawaii.”

Gabbard continued to take homophobic positions in the early years of her political career. In 2000, she reportedly slammed “homosexual activists” opposing her mother’s bid for the state board of education. While campaigning for Hawaii’s state house in 2002, Gabbard, who at 21 was the youngest person elected to that body, told the Honolulu Star-Bulletin, “Working with my father, Mike Gabbard, and others to pass a constitutional amendment to protect traditional marriage, I learned that real leaders are willing to make personal sacrifices for the common good.”

In 2004, Gabbard also led a protest of a bill that would have legalized civil unions in the state.

After her anti-LGBTQ statements resurfaced over the weekend, Gabbard provided CNN with a statement of apology, in which she explained how her views had evolved. “First, let me say I regret the positions I took in the past, and the things I said. I’m grateful for those in the LGBTQ+ community who have shared their aloha with me throughout my personal journey.”

Gabbard also cited her work on legislation promoting equal rights and protections for LGBTQ people, such as the Equality Act, repealing the Defense of Marriage Act, and others. “Much work remains to ensure equality and civil rights protections for LGBTQ+ Americans and if elected president, I will continue to fight for equal rights for all,” she said in the statement.

Gabbard had previously apologized for her past anti-LGBTQ positions. In 2012, when running for her first term in Congress, Gabbard reportedly told activists, “I want to apologize for statements that I have made in the past that have been very divisive and even disrespectful to those within the LGBT community.

“I know that those comments have been hurtful and I sincerely offer my apology to you and hope that you will accept it.”

It remains to be seen what impact the controversy will have on Gabbard’s presidential ambitions. As Kevin Hart recently learned, apologies for past homophobia can only go so far. But in what her fledgling campaign may take as a positive sign, the congressional LGBT Equality Caucus and its ten members have thus far chosen to remain mum on the issue.