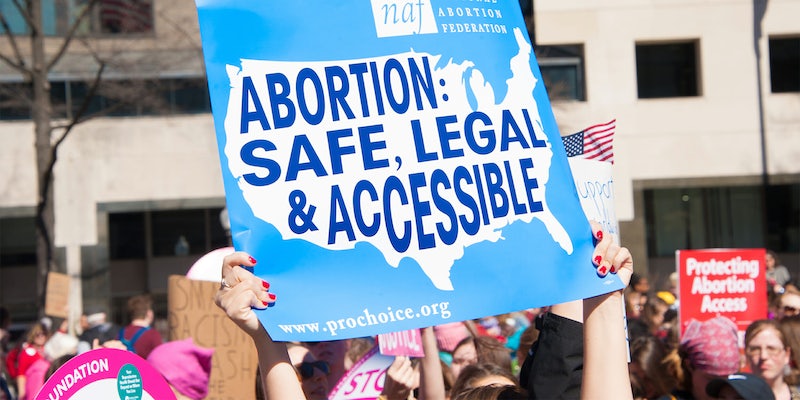 They are unanimously against it.

The early 2020 Democratic primaries have featured a string of interesting litmus tests for fledgling candidates, but, recently, Republicans in Alabama handed them a chance to speak directly on a controversial bill.

Last week, Alabama’s Senate passed the most restrictive abortion laws in the country. A doctor who performs an abortion can be charged with a felony and there are no exceptions if the pregnancy is the result of rape or incest.

The bill was slammed even by some Republicans; the chairwoman of the Republican National Committee said that she doesn’t personally agree with the law. Unsurprisingly, the draconian bill became a huge talking point for Democrats hoping to unseat President Donald Trump.

Former Vice President Joe Biden wrote on Twitter that laws like the Alabama one violate Roe v. Wade and that they are “unconstitutional.” He added, “Roe v. Wade is settled law and should not be overturned.”

That’s a bit rich coming from Biden who, while in the Senate, actually voted for individual states to be able to overturn Roe v. Wade.

Republicans in AL, FL, GA, and OH are ushering in laws that clearly violate Roe v Wade and they should be declared unconstitutional. Roe v Wade is settled law and should not be overturned. This choice should remain between a woman and her doctor.

Sen. Bernie Sanders (I-Vt.) was a lot louder about the Alabama bill than Biden, he said that the bill is “about controlling women’s bodies.”

From the stump, Sanders said, “the Alabama legislature and governor actually believe that it is appropriate to force a woman to have the baby of her rapist.”

The abortion ban in Alabama is not about protecting life. It is about controlling women's bodies. https://t.co/oWTWDrDzVf

Sen. Elizabeth Warren (D-Mass.) called the bill “dangerous and exceptionally cruel” on Twitter. She also said it was “the most extreme abortion ban in over 40 years.” She is also the first of the 2020 Democrats on this list that began fundraising off the bill, using the same language from Twitter in a Facebook ad.

Sen. Kamala Harris (D-Calif.) is also fundraising off the Alabama bill on Facebook. In her ad— which began running before Warren’s—she calls the law “a blatant attack on Roe v. Wade.”

She also slammed the bill on Twitter, sharing a New York Times article and writing that is was “outrageous news coming out of Alabama.”

In a tweet, Pete Buttigieg wrote that the “Alabama legislature is ignoring science, criminalizing abortion, and punishing women.” That was the only time that he named the state on Twitter.

Beto O’Rourke came out with a pretty strong rebuke on Twitter, writing, “it’s a radical attack on women across Alabama and America. We won’t back down when it comes to fully protecting Roe v. Wade.”

HB 314 is not only unconstitutional – it's a radical attack on women across Alabama and America. We won't back down when it comes to fully protecting Roe v. Wade, fighting dangerous efforts to roll back reproductive health care and defending a woman’s right to access an abortion.

Before the bill even passed in the Alabama legislature, Sen. Cory Booker (D-N.J.) wrote: “bills like this that aim to punish women & their doctors are gaining traction.” He added “we need to protect women’s health care. We need to defend Roe v. Wade.”

In an MSNBC interview, Booker said that men need to “get up off the sidelines” on bills like the Alabama law.

Men, we have to get up off the sidelines and fight this attack on women's reproductive rights the same way women have been doing. pic.twitter.com/hQ8UJWbnp5

Julián Castro, like nearly all the other candidates, chose to weigh in on Twitter and share an article about the ban and his thoughts. Castro called the vote “appalling news” and added, “we must defeat this unconstitutional and shameless attempt to strip women of their right to make health care choices.”

Appalling news out of #Alabama as lawmakers vote to effectively criminalize abortion. It’s time to stand up and speak out. We must defeat this unconstitutional and shameless attempt to strip women of their right to make health care choices. https://t.co/VgiJ0stS6r

Sen Amy Klobuchar (D-Minn.) wrote on Twitter of the ban, “this is wrong. This is unconstitutional.”

And the Minnesota senator unloaded on MSNBC, during an interview with Chris Matthews, calling the bill “dangerous” and noting that “73% of Americans do not want to overturn Roe v. Wade.” Klobuchar also said that she believes the bill is politically against the best interests of the Republicans.

Rep. Tulsi Gabbard (D-Hawaii)—who is polling in 10th place—tweeted that the bill “must be rejected.”

She also mentions women’s rights on her website, which reads: “Tulsi is committed to defending a woman’s right to choose, which government has no place infringing on.”

The site also notes that she has a 100% voting record with Planned Parenthood.

Andrew Yang, the meme candidate on a mission toward the Oval Office, weighed in on the Alabama decision on Twitter. He criticized the lack of exceptions in cases of rape and incest and wrote, “government should not be making decisions on behalf of women. I would protect women’s right to choose.”

Sen. Kirsten Gillibrand (D-N.Y.) has run largely as the candidate for women so it shouldn’t be surprising that she came out loudly against the bill.

On Twitter, Gillibrand wrote “This is a war on women, and it is time to fight like hell.”

The New York senator also ran Facebook ads with the same copy that she used on Twitter and the tagline “protect abortion rights.”

It’s a little hard to puzzle out the future of the Alabama bill. It will almost certainly go to the courts, where it’s likely to be struck down, since Roe v. Wade was decided decades ago. However, conservatives believe laws like this have a better chance given the new, more conservative makeup of the Supreme Court, with the addition of Brett Kavanaugh.

But whichever Democrat that the party nominates will use the law as ammunition in the election, accusing Trump and the Republicans of trying to take away a woman’s right to choose.

Correction: Gabbard addressed the bill in a tweet on May 16.