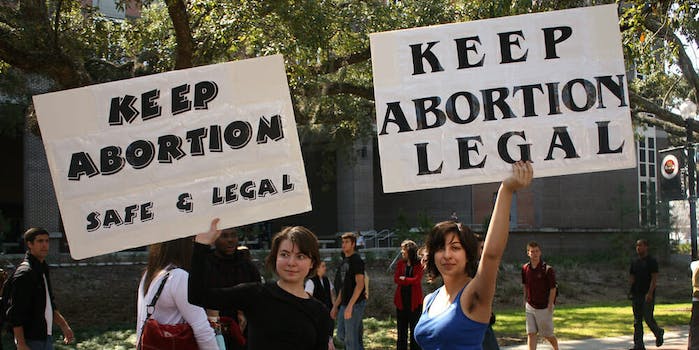 Here’s what you can do about Alabama’s abortion ban

The restrictions are closing in, but advocates aren’t giving up the fight.

On Tuesday, the Alabama state legislature passed a law banning all abortion, even in cases of incest or rape; if violated, it would also put abortion providers in prison for life. It is set to be the gravest anti-abortion law in the country—but there’s still time to fight back.

The law in Alabama is one of several brutally restrictive anti-abortion laws recently passed or in the works in multiple states, with Georgia’s “heartbeat bill” causing an uproar in recent weeks as it will prohibit abortion after a woman is six weeks pregnant. The law in Georgia was referred to as a “backdoor ban” by Rep. Alexandria Ocasio-Cortez, who pointed out that at six weeks, you’d only be two weeks late on your period, which is not that unusual for many people.

Alabama has taken it even further, with a bill that outlaws abortion entirely except “to avoid a serious health risk to the unborn child’s mother,” or if the “unborn child has a lethal anomaly.” Any doctor who provides an abortion outside of those circumstances would be punished with life in prison. Democrats in the Alabama Senate attempted to add an amendment for exceptions in cases of rape or incest, but 21 senators, all cisgender men, voted it down.

Reproductive rights advocates are sending an important message right now to people in Alabama however: Abortion isn’t illegal yet. The governor hasn’t signed the law, and if she does, there will still be six months to legally get an abortion in the state.

Abortion is STILL LEGAL in Alabama. If you have an appointment scheduled, DO NOT ASSUME IT IS CANCELED. You can still have an abortion in Alabama! Call your clinic and they will walk you though the process. Don't panic yet.

Things we're going to do:
-Donate to @YellowFund
-Call our local clinic to volunteer as a clinic escort

Things we're not going to do:
-Tell pregnant people in Alabama to "move"
-Dismiss Alabamians as "getting what they voted for"

Your rights do not depend on your zip code.

With restrictions closing in, access to abortion is getting more difficult, and expensive. The Yellowhammer Fund is an organization that provides funding to people seeking care at any of the three remaining abortion clinics in Alabama. And only three clinics in a state the size of Alabama means that many people will have to travel and stay somewhere overnight if they need an abortion, and the Yellowhammer Fund helps with that too.

“We hoped that some of our advocates in the Senate could talk some sense into their colleagues, but our state senators were more interested in trying to score political points off of the suffering of thousands of Alabamians,” said Amanda Reyes, founder of the Yellowhammer Fund, to the Daily Dot. “We’re committed to making sure that Alabamians can get the abortions that they need no matter what restrictions our state lawmakers impose on us.”

If you want to donate to Yellowhammer, head here. The National Network of Abortion Funds also offers financial support for abortions nationwide, and you choose between donating once or on a monthly basis. Another way to help is by reaching out to your local health center and finding out how to volunteer to be an abortion escort. In the meantime, everyone stock up on Plan B for yourself and for others. These bills aren’t going away.