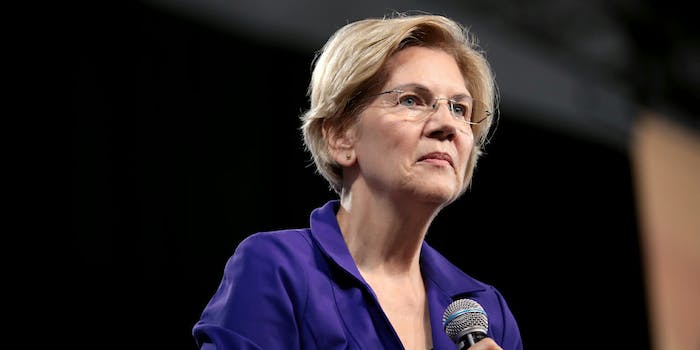 The proposals come after a number of states have passed restrictive abortion bills.

Sen. Elizabeth Warren (D-Mass.) called on Congress to pass a federal law that would preempt state-level laws that have restricted abortion access, adding to the numerous policy proposals she’s released as part of her 2020 presidential bid.

Warren called for the action in a Medium post on Friday morning. In it, she says Congress needed to pass a law to “protect access to reproductive care from right-wing ideologues in the states.”

“This is a dark moment,” Warren wrote in the post. “People are scared and angry. And they are right to be. But this isn’t a moment to back down — it’s time to fight back.”

The 2020 hopeful said the law should mirror the rights granted in Roe v. Wade but also stop states from “interfering in the ability of a health care provider to provide medical care, including abortion services.”

In the proposal, Warren also calls for the repeal of the Hyde Amendment, which bars the use of federal funds for abortions.

“All women — no matter where they live, where they’re from, how much money they make, or the color of their skin — are entitled to access the high-quality, evidence-based reproductive health care that is envisioned by Roe,” the senator wrote.

Warren’s call comes as a number of states, including Alabama, have passed laws banning abortion. Alabama’s law in particular has been criticized for provisions that ban abortion even in cases of rape or incest, and putting abortion providers in prison for life. Georgia’s “heartbeat bill” has also drawn criticism, as have measures in Kentucky, Mississippi, and Ohio.