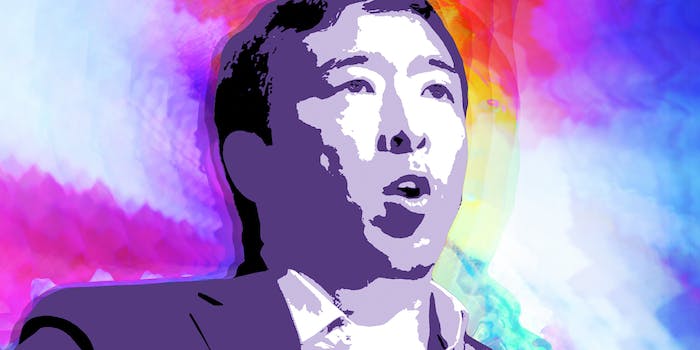 The streaming site loves rapping about him.

Andrew Yang’s role as the meme magnet of the 2020 race has been extensively chronicled. Even the New York Times has written about the candidate and his pivot from parody to politician and back again.

But all that ink spilled on Yang, a 44-year-old entrepreneur whose lead proposal is to give all adult Americans $1,000 every month, still doesn’t capture quite how obsessed the more creative corners of the internet can be. Especially when they’re bored and feel like dipping their toes into politics.

Most recently, those corners of the internet have branched out from memes, turning their time to music. And Andrew Yang’s followers (they call themselves ‘Yang Gang’) have put together a lot of music about their favorite White House hopeful.

The musical tributes to Yang have largely blossomed on SoundCloud, which is the ideal venue for the meme-heavy candidate. Soundcloud rappers are rarely good but they’re nearly always young and their lyrics often deal with meme lingo.

Even goofy Elon Musk has tried to enter the SoundCloud meme-rapper arena with his well-produced but over-autotuned jam “RIP Harambe.”

Most of the SoundCloud tributes to Andrew Yang center around his promise for universal basic income. It’s a rather easy policy to hang a tune on. His supporters even have a name for the monthly payment: “Money Bags.” Here’s one that features the line “still chasing that money bag on a sick day.” Unfortunately, the hook leaves a lot to be desired with the less-than-clever spit “yang gang, we yang gang, we yangin’”

This piece is by a Spotify account called “Andrew Yang” with the title “Yang Gang.”

Here’s one by an account titled “Stanley from Jersey” with a catchy title “Don’t Mess With Me Donald, I’m Yangsta” that’s a little better produced, maybe even better so than the large swath of SoundCloud rap.

The rapper is quite a bit smoother than our previous example and the hook manages to take a shot at Trump while still being catchy—“Donald won’t run me mic check.” Like the previous artist, this is his only track, which either explains why it’s less-than-stellar or serves as an example of how feverish this whole “Yang Gang” phenomenon is.

And, because it’s SoundCloud, you already knew there was going to be at least one horrible mumble-rap tune. Here that is this one by a rapper calling himself Shota Bird who has a lot of songs, none of them any good. Even the lyrics in this bit, titled “Yang Gang,” are uncreative. Its most prominent line is “hey, Andrew Yang is my G, he gettin’ me bags for motherfucking free.”

But, if you thought that it was all hip-hop fanfare for Andrew Yang, you were wrong. Here’s a fun little powerpop jam called “Andrew Yang for President” by a band called Nalamora that actually does pretty well in the speakers as a Bowling for Soup knock-off, and features a solid guitar solo. But the lyrics are unbearably preachy. There are cringy lines like “Andrew Yang is who we want leading our country next term” and “we need someone younger, refreshing and new. Yang’s plans would be a blessing for you.” On March 18, Andrew Yang himself called this jam “The current leader for best song about me.”

Outside of Soundcloud, there’s still a heck of a lot of content. The Yang tribute that comes up on Spotify is by a rapper called Chef Zoot and is probably the strongest in this lot, the producing is superior to the previous mentions and it has a stronger feel to it. Or at least a more authentic one. There are some gut-check lyrics that actually help you understand the appeal of Andrew Yang, bits like “I just left my school, couldn’t find a pot to piss in, harsh recidivism lead to extra extradition, imagine giving ten benjamins to kids in my position.”

It’s called Trickle up, which is is a nod to the economic theory that the middle classes drive the economy. There’s a lyric that describes that theory, with the line “Yang bucks trickle up.”

Perhaps the most talked-about Andrew Yang song is probably by a man that Yang doesn’t want to associate himself with—former alt-right personality Baked Alaska. The weird geek, Baked Alaska, attended the Charlottesville rally beside neo-Nazis and has been a staunch Trump supporter.

But he seems to have come aboard the Andrew Yang fanfare with his latest tune, Yang Gang Anthem. It’s the sort of song that will make you want to bury your head in the sand and, if you know who this character is jumping around on your screen, maybe bury your whole body.

Andrew Yang himself has even entertained the idea that these songs about him boost his platform. On March 22, he tweeted out a cut of this song, which is still less-than-great, but does feature some creative graphics.

Fortunately, this fad of putting 2020 candidates into songs seems to be limited to Andrew Yang. A SoundCloud search for Elizabeth Warren brings up a whole lot of podcasts but not any songs. We can only hope that, unlike the presidential race, this doesn’t get more unbearable.

As for the candidate, there’s a hope that he can make the transition from a meme to an Oval Office contender. In 2019, that’s actually not as unthinkable as it sounds. Donald Trump’s campaign in the early days was driven, in part, by internet fandom and red hats.