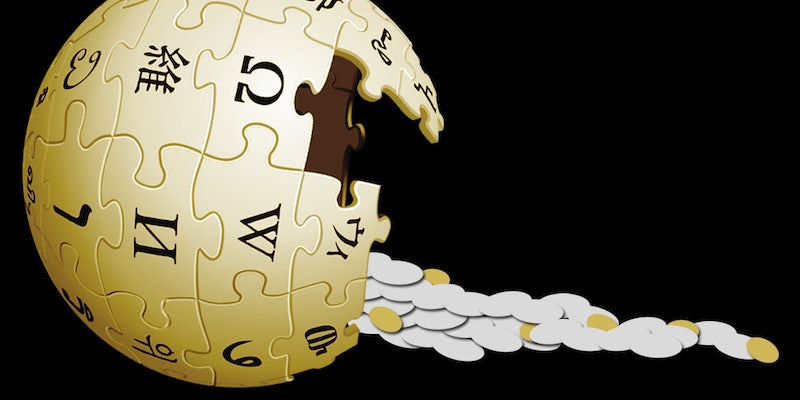 Where does your Wikipedia donation go? Outgoing chief warns of potential corruption

The same people dishing out Wikimedia's millions of dollars in grants are directly benefiting from them.

When Wikipedia decided to roll out an aggressive fundraising effort a few years ago, the free encyclopedia came with a remarkably effective battle plan. For the entirety of the campaign, cofounder Jimmy Wales stared visitors down from the top of every page, making you feel guilty every time you viewed an article without paying a dime.

It worked. From 2011 to 2012, Wikipedia’s fundraising arm, the Wikimedia Foundation, pulled in $38.4 million. It was a major increase from the $5 million raised from 2007 to 2008, one that occurred even as editorial involvement with Wikipedia was on the decline.

But where does all this money go?

In a statement last month, outgoing Wikimedia Foundation Chair Sue Gardner criticized the way her organization has doled out funds. Too much is being spent on groups that do too little to enhance the value of the encyclopedia itself, she argued. What’s worse, many of those being awarded grants are the same people responsible for giving them out, which Gardner warned could lead to “log-rolling, self-dealing and other corrupt practices.”

Though not in charge of Wikipedia’s content, the Wikimedia Foundation, or WMF, is the most powerful promoter of the open-source encyclopedia. It manages the technical infrastructure and day-to-day business operations of Wikipedia—one of the most-visited sites in the world.

WMF is based in San Francisco, but more than 40 independent chapter Wikimedia organizations exist around the world. These chapters are the biggest recipients of Wikimedia grant funding. But according to Gardner, it’s not clear how filling the coffers of the chapter organizations benefits the site as a whole.

Last year, the Funds Dissemination Committee (FDC) gave out $5.65 million in grants, the lion’s share of which—89 percent—went to affiliate chapters. And 12 chapters in particular received 83 percent of the total grants.

“I believe that currently, too large a proportion of the movement’s money is being spent by the chapters,” Gardner, who has largely been responsible for the foundation’s transition into a fundraising behemoth, wrote in response to the FDC’s latest report.

“The value in the Wikimedia projects is primarily created by individual editors: individuals create the value for readers, which results in those readers donating money to the movement.”

In an email to the Daily Dot, Gardner noted that these opinions were “not new, nor are they unique to” her.

Indeed, Gardner’s statement echoed the criticism of a number of prominent Wikipedia editors and critics in recent years. The concern is that all this funding has done less to help the site than it has to create a “professional bureaucratic class” surrounding the Wikipedia project,” as the Register’s Andrew Orlowski put it. Orlowski points out that the foundation’s staff grew from three full-timers in 2006 to 174 in 2012-13.

Gardner herself notes that there are very few members on the FDC who aren’t also chapter members. In fact, the majority of the committee’s members are either former or current chapter board members.

The coziness that exists between the FDC and chapter board members calls up memories of past chapter improprieties. In 2012, a former chapter board member was accused of using his position within the organization to promote Gibraltar on the site. At the same time, he served on the Gibraltar government payroll as a PR consultant.

Though Gardner believes the FDC is uniquely transparent and that its members are capable of acting without self-interest, others aren’t quite so convinced.

One critic, Gregory Kohs, cofounder of the muck-raking site Wikipediocracy, describes the foundation’s appetite for expansion as “empire building.” He argues that the work of a nearly 200-member Wikimedia staff could easily be done by a workforce a fraction of the size.

But it’s not just the longtime critics. Many everyday Wikipedians are concerned about whether WMF still exists to serve Wikipedia, or vice versa.

Conflicts of interest are a major area of concern throughout Wikipedia culture, and editors like Tango say they are unavoidable with so much money involved.

“‘Assume Good Faith’ is a great policy when writing an collaborative encyclopaedia,” Tango writes, referring to a fundamental principle on Wikipedia whereby editors are encouraged to assume all contributions to the encyclopedia are done with good intent. “It’s not so simple when you are dealing with [$11 million].”

But others are less concerned about corruption and more worried about how chapters actually spend all that money. Andreas Kolbe, an active Wikipedian and Wikipediocracy moderator, says many of the chapters have a propensity for spending on projects intended to bring publicity rather than genuinely enhancing the site.

Despite those frank statements on Wikimedia and the FDC, Gardner heaps lots of praise on the organization she’s leaving. She insists the WMF is adaptable and that, with the right changes, it can shift funding priorities. One way to do that is to make the FDC more diverse. And Grant seekers, Gardner said, “should need to be able to say clearly how their plan will make an important contribution to helping Wikimedia movement achieve its mission.”

At any rate, Gardner plans to step down soon. WIll her successor heed her advice?

Correction: The charter Wikimedia organizations do not necessarily advance the foundation’s agenda in their native regions, as originally reported. As Matthew Roth, the global communications manager, clarified to the Dot, “The chapters are independent organizations and their specific mandate can be different than ours.” The headline was also update for the sake of clarity.