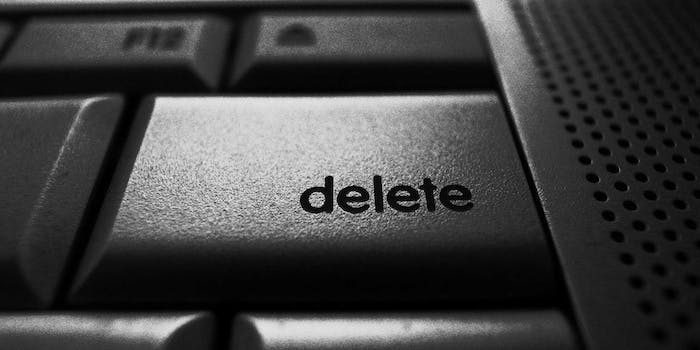 Why you need to delete your Facebook and start over

Happy 10th birthday, Facebook. Here's why I want to quit you.

Are you sick of the Facebook’s-been-around-for-10-years media circle jerk yet? Probably. Between the reflections of what living our lives on Facebook means and the summaries of its accomplishments (and, you know, those completely narcissistic and manipulative Look Back videos that we all watched at least twice), we’re collectively being conditioned to be a little nostalgic about Facebook—to feel good about this thing we’ve invested in for however many years we’ve had an account.

This angle, the one we’ve generally been fed all week, is one way to feel about Facebook. Here’s this collection I’ve made; I made this! And it will be saved here for me, forever. The other way, of course, is to go with the creepy colloquy. By hoarding all this crap, Facebook is a Big Brother-y monster; surely this shall all be used against us on digital judgement day, whatever the hell that is. The only choice then is to delete Facebook and leave without a glance over your shoulder.

But wait! Don’t hit that delete button yet! (It’s actually quite difficult, because Facebook makes you go through a whole “are you suuuuuuuuuuuuure you want to leave?” process.) What if I were to tell you there is a third option? Something between blindly continuing on your Facebooking way and running around with a tinfoil hat? Because, dear readers, there is.

And then get a new one.

Why should you do this? Because you get a clean slate, and you’re (I assume) at an age now that you can make better Facebook decisions. Here are the things you will be able to erase:

1) Pictures of you and your ex, which seem to surface thanks to a new comment or Like at the most inopportune time.

2) Pictures of you being a drunken idiot at some nameless bar.

3) Pictures of your terrible fashion/hair styles.

4) Pictures of when you were fat that you don’t want people to see.

5) Pictures of you when you were in shape that make you sad now.

6) All of those status updates you wrote in third person when the update bar first appeared (e.g., “Molly is eating cereal and watching Firefly on a Friday, whaaaatuppppppp weekend!”).

7) All of those status updates from when you were in that angsty phase and thought song lyrics were an adequate way of telling people what you were up to.

8) All of those really old Wall Posts (old messages? It’s an undying debate) that used to be private and now aren’t and are very difficult to hide.

9) And while we’re on the subject of messages: Bye old messages! No more lingering notes from exes, friends you were fighting with, or weirdos who were hitting on you.

10) Pages you were guilted into following by friends and family whose updates you do not want to see.

11) Friends you’re no longer friends with.

And much, much more! Sure, maybe the last few years (months?) of Facebook activity don’t contain things you’d like to get rid of or forget, but I’d argue this exemplary behavior isn’t worth the shame of the rest of it. Research says we tend to rewrite our memories, going back and letting our brains create a more acceptable version of events, but that’s really hard when everything’s there, plain and pixelated as the day is long.

You’re older (obviously), wiser (definitely), stronger (maybe), better looking (probably) than you were when you opened your account. And it’s healthy to forget parts of your past, or at least to let them exist and fade in your brain, instead of lingering, static and unchanging.

So delete, but then go back. Start over. Search for and add people you’re actually friends with; if you can’t remember someone’s name, then you’re not friends with them. Upload pictures and make albums in an order that makes sense, instead of the confusing jumble they are now. Purge everything, and rebuild.

You and your new Facebook will rise like a phoenix from the ashes. Leave the old behind, and embrace the new.

And then … do it again in five years. Repeat this process until Facebook is irrelevant or you die, whichever comes first.