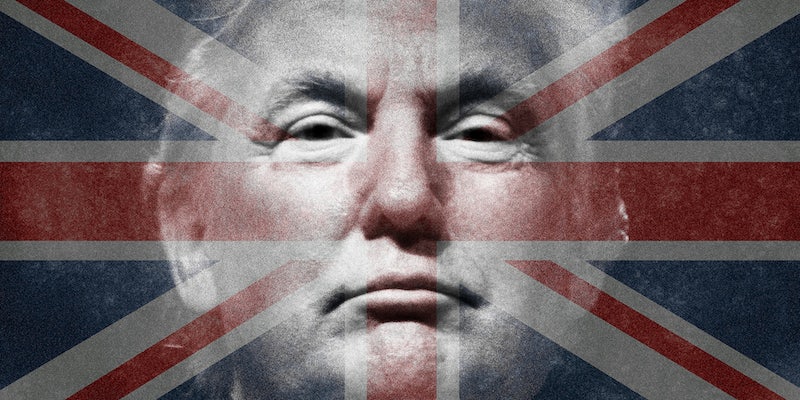 This is bigger than one man and his hair.

Many of us, myself included, would like to ban Donald Trump—from being president, from primetime television, from sprawling his name on another building—but the British actually have the option.

The GOP frontrunner’s call to ban all Muslims from entering the United States and subsequent comments that parts of London are “no-go” zones due to Muslim extremism were predictably and thankfully met with widespread condemnation.

But across the Atlantic, they took it a step further, deciding to give Trump a taste of his own medicine. Instead of simply condemning Trump’s comments, a petition began circulating to have the Donald banned from the U.K. Within two days it had garnered 340,000 signatures and international coverage. Now, less than a month later, it has been signed by over 500,000 British citizens, and will be debated in Parliament on Monday.

The United Kingdom is trying hard to disguise their massive Muslim problem. Everybody is wise to what is happening, very sad! Be honest.

I have not heard Trump make a single statement that makes sense on a verbal level. He doesn't finish sentences. It doesn't seem to matter.

Trump's call to ban Muslims from entering the US is an attack on democratic values & affront to common humanity. Let's unite against racism

Donald Trump doesn’t have a clue about London – his comments are divisive and dangerous. I hope his campaign dies a death.

Don’t get too excited, though. The vote is “largely symbolic” according to Buzzfeed UK. Answering a question from Parliament opposition member Tulip Siddiq last month, Prime Minister David Cameron said that while “it is right we exclude people when they are going to radicalize or encourage extremism,” and that Trump’s remarks are “divisive, stupid, and wrong,” he disagrees with banning him from the country. On this, the prime minister is right. Banning Trump would be diplomatically disastrous for Britain and would eliminate the possibility to challenge his odious, bigoted views head-on.

On the 13 bus & on my phone doing a bbc radio interview condemning Donald Trump's disgusting comments. Random passengers cheering me on!

Trump would hardly be the first American to be banned from entering the United Kingdom. The Home Secretary has the power to ban people convicted of a crime or who are threats to national security and social cohesion. Mike Tyson and Chris Brown were kept out for their rape and assault convictions. The Westboro Baptist Church is not allowed in. Michael Savage, the right-wing shock jock known for his inflammatory comments about Muslims and people with autism, has been banned from entering the country since 2009. So too is Terry Jones, the Florida preacher who infamously burned a Koran in 2010. The British don’t like a bully.

Which is what led Siddiq to ask Cameron whether an exception would be made for a “billionaire politician.” Well, yes. It’s easy to sympathize and even agree with Siddiq’s broad point: Trump is a proto-fascist who seeks to divide not just the United States but the United Kingdom with his incendiary rhetoric and racist policy proposals. But he is also a frontrunner for the presidency of the United States of America—nominally, at least, Britain’s closest ally. Banning him is not the same as banning a homophobic hate group or Islamaphobic preacher.

Imagine if Trump actually wins the nomination, which despite the hopeful predictions of the liberal commentariat, is a real possibility. It is customary for the Democratic and Republican nominees to make a foreign trip, and this almost always includes Britain. Prohibiting Trump from meeting with the British prime minister would alone be a diplomatic headache. Imagine the response from a Republican-controlled Congress, who wouldn’t soon forget that their candidate was shunned.

The British people need to challenge Trump’s bigotry, disprove his prejudices, and discredit his odious policies. Not for him—he may never change—but for themselves and for the rest of us, so we can see just what Britain stands for.

Congress, after all, controls the American purse strings. The British government itself acknowledges that the U.S. and U.K. are one another’s largest foreign investors. While the European Union is often cited as Britain’s largest trading partner, when broken down by sovereign state, the U.S. ranks number one with roughly 17 percent of British exports shipped to America. Banning him would be a diplomatic nightmare, fuelling the populist flames that set him ablaze in America and threatening the cultural ties that bind our two nations.

I don’t like this any more than Siddiq does. Trump’s a monster. But this is bigger than one man and his hair. International politics often requires you to hold your nose and deal with unsavoury characters. It’s why Egyptian President Abdel Fatah al-Sisi was allowed to visit the U.K. last November, despite protests over his human rights abuses. It’s why former Prime Minister Tony Blair met with Hamas. It’s why we don’t stop talking to Russian President Vladimir Putin. National security and global stability depend on open communication with world leaders. And as of now, this includes Donald Trump.

The threat to national security is routinely trotted out by the prime minister as a key reason why Britain remains an ally of Saudi Arabia. Since 2010, Britain has sold £5.6 billion in weapons to the Saudis, despite widespread condemnation of their human rights abuses, most recently this week’s mass execution. In October of last year, Cameron told Channel 4’s Jon Snow that “the reason we have the relationship [with the Saudis] is our own national security,” citing at least one case where “a bomb that would have potentially blown up over Britain” was stopped by intelligence provided by Riyadh.

If Saudi Arabia is that important to Britain’s security, we cannot underestimate the vital role its alliance with America plays. The mythical “special relationship” aside, we’re NATO allies who routinely share intelligence through Five Eyes, a collection of Anglosphere countries that includes Canada, New Zealand, and Australia. Our military and intelligence cooperation runs deep and cannot be dismissed. Britain and America need one another to combat the Islamic State in the Middle East and a possibly-nuclear North Korea in the Far East. We cannot allow Trump to drive a wedge between us now.

We can, however, challenge and condemn him. The prime minister said that the whole country would “unite against” Trump, and he’s bang on the money. Following Trump’s comments that parts of London were a “no-go” areas do to radical Muslims, Britain fired back with #TrumpFacts, mocking the mogul with characteristic sarcasm and wit. The outrage has come from all corners of the United Kingdom and across the political spectrum. Scotland’s First Minister, Nicola Sturgeon, sacked Trump from GlobalScot, a network of prominent business leaders serving as ambassadors for Scotland. (Trump’s mother was Scottish.) London Mayor Boris Johnson said there are parts of New York he wouldn’t visit due to “the real risk of meeting Donald Trump.”

But virtually everyone agreed, as Fleet Street Fox wrote for the Daily Mirror, that rather than ban Trump, we should take him on a tour of all things British immigrants and their scion have contributed, from a jog with Olympian Mo Farrah (born in Somalia) to a curry shop, and “then, take him to Beachy Head and contain the urge to push him off.” The British people need to challenge Trump’s bigotry, disprove his prejudices, and discredit his odious policies. Not for him—he may never change—but for themselves and for the rest of us, so we can see just what Britain stands for.

The worlds tallest minaret calls the whole nation to prayer in the UK #trumpfacts pic.twitter.com/GvyV6iH6PB

Parts of Britain are so radicalised that the elderly spend their pensions going to Mecca. #TrumpFacts pic.twitter.com/dYGzOmJck0

It’s happened before, with Britain’s own version of Donald Trump.

In 2009, Nick Griffin of the far-right British National Party was elected to the European Parliament. As such, he was (for the first and only time) invited on Question Time, the BBC’s flagship political program. His fellow panellists—Jack Straw, the grandson of a Jewish immigrant; Baroness Warsi, the daughter of Muslim immigrants; and Bonnie Greer, an American-born Black playwright and scholar—eviscerated him.

Warsi refused to engage with his xenophobic, anti-immigrant rhetoric “in terms of Black and brown people,” and Greer wiped the floor with his theories on “indigenous Britons.” Some feared that giving Griffin such a prestigious platform would legitimise his views, but in hindsight Question Time was the beginning of the end for both him and the BNP.

So invite Trump to Britain. I’ll tag along as his American guide. Let’s take him to Walthamstow, show him around and introduce him to the wonderful British Muslims who contribute every day to the success of the nation. Introduce him to Labour’s Muslim mayoral candidate, Sadiq Kahn, the son of a bus driver who pulled himself up to become an MP. Or take him to a museum and teach him about the Muslims who gave their lives for king and country during the Second World War.

Britain needs America, and for now, that unfortunately means dealing with Trump. Banning him may be diplomatically untenable, but that doesn’t mean we have to sit idly by while he spouts off bigotry and lies. So let this debate in Parliament be less about banning him and more about ridiculing him. After all, there’s nothing more British than mocking an ignorant American.