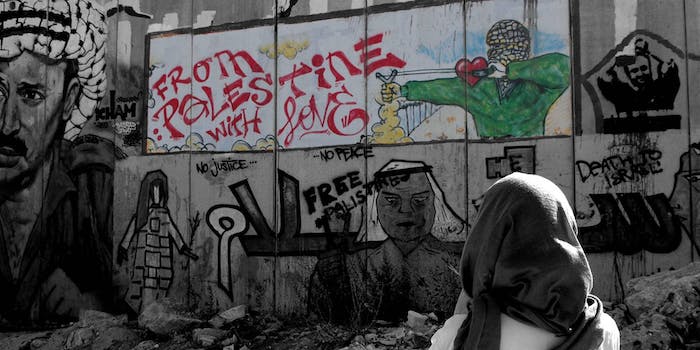 A social experiment can't compare to the experience of those who live it.

For Lent, Jessey Eagan decided she would would walk a mile in another woman’s headscarf, donning the religious head covering some Muslim women choose to wear, the hijab. Eagan, however, is not Muslim. A practicing Christian, she decided to wear the hijab in an attempt to understand “what it feels like to be an outsider.” She’s documenting her experiences on her blog.

Eagan, however, is not the first to try wearing the head covering as part of a “social experiment.” Many college campuses, including my own, conduct a “Wear a Hijab for a Day” event where female college students experience wearing the hijab; four of Buzzfeed’s own staff members participated in the same experiment for a viral video. While each of these attempts at solidarity have their hearts in the right place, these efforts miss the mark in exploring what it is really like to be a Muslim woman wearing hijab in the United States.

As a hijabi, I believe that Eagan, BuzzFeed’s staff, and others cannot fully understand the daily struggle of women clearly identified as Muslim by wearing a hijab “full-time.” Hijabi women are consistently subjected to stares and pervasive microaggressions (i.e., subtle forms of discrimination, from strangers, friends, and coworkers). In the past, I’ve been asked loaded and offensive questions: Strangers want to know if my father or husband forces me to wear the hijab or if I will be beaten for uncovering. Even though I’ve lived in Texas my whole life, I’m often told I’m “exotic” and asked where I am “really” from. I frequently use the word “y’all” and don’t have an accent, but I still have to defend my right to be just as American as everyone else.

These questions can be harmless, a curiosity about the scarf I wear around my head, but they’re also constant reminders that I do not belong. I’m forever marked as an outsider.

These questions can be harmless, a curiosity about the scarf I wear around my head, but they’re also constant reminders that I do not belong.

But wearing a hijab is more than just about microaggressions; it’s about being always identified as a Muslim. Like it or not, the actions of the person wearing a hijab reflect upon 1.57 billion people. We often prefer to lump an entire group into easy to understand characteristics or attributes as a shortcut used to understand others.

Stereotypes help make the “Other” make sense to us, but simply looking the part, as Jessey Eagan proposes, is only the beginning of understanding that divide. In wearing a hijab temporarily, women like Eagan cannot experience the heart wrenching anxiety after the Boston Bombing, the Charlie Hebdo attack, or an ISIS beheading. They cannot experience the fear of walking alone in public every year on the anniversary of September 11. Can a social experiment ever help explain the disappointment we feel when yet another TV show like Homeland or 24 makes a thick-accented Arab terrorist their villain? One day’s worth of experience cannot compare to a lifetime of being the “enemy.”

However, Eagan isn’t the first to struggle in her attempts at allyship, as our country has a history of allowing the privileged to speak for minorities. In the best-selling 1961 non-fiction book, Black Like Me, white journalist John Howard Griffin darkened his skin temporarily to experience the segregated South of the 1960s as a black American. Griffin recounted his experience travelling in buses, eating in restaurants, and the difficulty of finding a designated colored bathroom all while dodging hate stares from whites. He described the experience as a “personal nightmare,” and after publishing his account, Griffin faced unimaginable hate and backlash; protesters even hung an effigy of Griffin in his hometown.

Despite the turmoil, Griffin was highly praised for his work and became a national celebrity as a result, selling 10 million copies of his book. Though Griffin provided an account of racial segregation in the South, black authors such as James Baldwin wrote first-hand about the black experience and failed to receive the same widespread recognition in their time. Meanwhile, Griffin’s account has been translated into 14 languages, a staple of high school curricula. Although Malcolm X’s autobiography would later join Griffin in English classes, he was labeled as an extremist in the volatile 1960s; in a 1959 CBS television documentary, Malcolm X was portrayed at spearheading the “rise of black racism.”

One day’s worth of experience cannot compare to a lifetime of being the “enemy.”

Other black leaders received similar treatment. The FBI surveilled Martin Luther King Jr. and labeled his group, the Southern Christian Leadership Conference, as a black nationalist hate group in an attempt to undermine his power. While Griffin’s account was certainly groundbreaking, was it as important as listening to the black voices expressing their own experiences of segregation and racism?

This February, Banksy drank a bit of Griffin’s Kool-Aid: The well-known graffiti artist and activist published recent photos and video on his website in an attempt to “beautif[y]” Gaza’s destruction. After Israel’s summer 2014 siege of Gaza, which resulted in the destruction of entire neighborhoods, much of the city is still destroyed. Banksy’s art intended to raise awareness about the destruction and the region’s humanitarian situation, as access to electricity and water is routinely shut off to residents.

However, his celebrity also overshadowed local artists who have long been drawing attention to the same subjects. Artists like Tawfik Gebreel, Bushra Shanan, and Belal Khaled have responded to the constant trauma of bombs and rockets by finding humanity in the tragedy; they transformed images of smoke in the sky after a falling rocket by inscribing victim’s faces over the destruction, like a father playing with his child, or a mother cradling her baby. Of course, they have not received the same amount of attention as Banksy has. While Banksy watched the siege from afar, these artists lived it.

While well-meaning, these examples show that more weight is given to privileged outsiders while ignoring the voices of members of these communities who can speak first-hand to their own struggles. After Lent, Eagan will no longer be a “Muslim,” Griffin’s skin changed back into its former white complexion, and Banksy eventually left Gaza.

While Banksy watched the siege from afar, these artists lived it.

However, Muslim women’s identities aren’t an experiment, and it does them no favors to offer them solidarity while implicitly reinforcing their own marginalization. As Jamie Utt reminds us in an essay for Everyday Feminism, one of the most important parts of allyship is giving a platform to others. “True solidarity means supporting the work of those you’re allying yourself to, not solely creating a platform for your own voice and work,” Jamie Utt writes. “Sure, your privilege may afford you the spotlight sometimes … but whenever possible, allies turn that spotlight away from themselves and to the voices that are so often marginalized and ignored.”

If we want to know what it’s like to wear a hijab, the solution is simple: ask. We do not need to rely on people with privilege to understand the experiences of the “other,” as plenty of minorities voices on the issue waiting to be heard. Engage in conversation by seeking out information on Twitter or Tumblr, read essays and books written by minorities, and when you see someone different from you, strike up a conversation. By giving people the platform and the opportunity to speak for themselves, we can allow people to tell their own stories; we only have to listen.