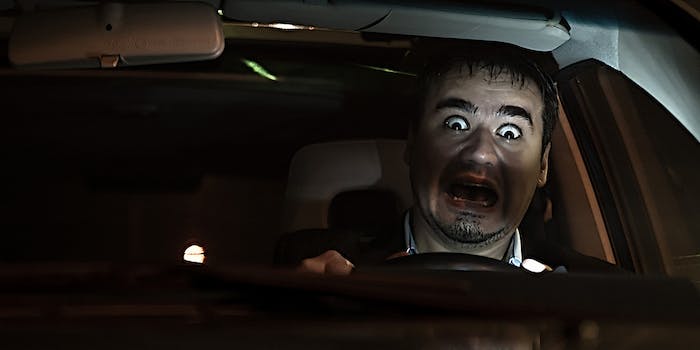 Why are we willing to put so much faith in technology?

You’ve surely seen the commercial: a dad and his son are out or a drive. The son gets distracted by a pretty girl while the dad is looking out the window, so neither one of them sees the car stopped short ahead of them. Thanks, however, to the car’s high-tech, state-of-the-art sensors, the car manages to stop itself in time.

Every time this commercial comes on, I turn to my husband and say “NO. NO NO NO NEVER.”

My bristling at this commercial comes down to a very basic idea: I can’t understand why on earth we would ever want to give up that much control to a machine. And then I start hearing about them on the news: driverless cars.

I have a friend who is convinced that GPS systems are the robots’ way of making us subservient, by seeing how well we follow their directions, that with their route guidance they are sowing the seeds of trust in the mechanism that will eventually lead us into the fiery pits. I laughed this off when she told me about it (I love my GPS; a writer friend of mine named my GPS Edith Bigelow. Edith Bigelow: gets you where you need to go!) but when you apply the same logic to driverless cars, I fear she might be onto something. Maybe the robots’ plan with the GPS wasn’t enough? Maybe we won’t be the ones driving ourselves into the fiery pits, the robots will be the ones driving us there themselves.

In an episode of HBO’s Silicon Valley, the already nervous character Jared finds himself whisked off to Arallon—a remote island located in the middle of the ocean on the international date line—by tech guru Peter Gregory’s driverless car because of what essentially comes down to a scheduling error. I find myself thinking of this scene every time I imagine myself in a driverless car. What if it drives me into the fiery pit? Daily Dot writer s.e. smith already wondered about some of the potential abuses that could occur with driverless cars, and I’m on the same page. (smith also imagined some of the benefits, and I’m not averse to the safety potential myself, though it doesn’t outweigh my suspicions.)

Rather than continuing to wonder what could go wrong, though, I find myself increasingly wondering how we got here to begin with. Why are we so keen to put our faith in technology? Are we that trusting in the technologies we’ve created that we’re willing to let them take the wheel?

I’m not so blind to how technology works not to know that behind every computer is a human hand. Of course, there are going to be allowances made for overrides. Of course, there are going to be considerations made for safety. Of course, we wouldn’t build a robot that would drive us into a fiery pit. But what our willingness to allow driverless cars onto the roads says to me is that we have put all of our trust into the technology basket. It’s so prevalent, so much a part of our daily lives, that we seem to think it’s OK without a second thought.

We’re so devoted to our technology that we trust in it more than we trust in ourselves. We have relinquished our wonder to the Internet and given up menial tasks on a daily basis to apps that promise to make our lives easier. “Let go and let God” has, for whatever reason, become “let go and let Google.”

This even circles back to why we’d invent a driverless car to begin with. I was recently talking with someone who said his kids hate driving because it means more time away from their devices. His argument was that younger people like living in the more walkable parts of cities because it allows them to be on Twitter and Facebook all the time.

I can see his point—and I can also see why it would make people more accepting of driverless cars. If someone else is driving, I can Instagram the view. If my robot cab driver takes over the responsibility of getting me there, I can tweet that I’m on my way. We’ve already taken the step of embedding our technology into the technology of a car with Bluetooth; now we’re removing the need even for this step by removing ourselves from behind the wheel.

Another point I feel is important to bring up: I feel like driverless cars are just a pathetic excuse for avoiding coming up with better solutions for getting people around, like decent public transportation. We’re so addicted to our cars and our roads that instead of thinking of creative and environmental solutions for getting people from one place to another, we’ve gone and figured out a way to make our cars robotic.

When it comes to car addiction, I’ll raise one hand off the wheel and admit it: I’m guilty as charged. I love what it feels like to whizz down the road in my own comfortable personal space, howling along to whatever Justin Timberlake song happens to be on the radio. But I’d be far more likely to give up that freedom for creative public transportation than I would for a Subaru that drives itself.

It’s probably strange of me to put my faith more in other humans—the ones who text and drive, who drink and drive, who are sleep-deprived and distracted by the radio and out there on the road driving their SUVs like maniacs—than in the same technology that allows us to move 70 mph down a highway to begin with, but that’s where I am. I can understand how we want better technology for preventing accidents, for preventing driver error, but when we start relying on it entirely, aren’t we putting ourselves in more danger? We are humans and we have reason and we have the capacity to make decisions, and yet we’re leaving this all up to the machines? When we start handing everything over to the machines, why are we even still here?

As the first real driverless cars start to hit the road, we’ll start to see how this plays out, whether or not the machines can find their way to making driving better for us in the real world. But if one day we all look up from our screens where we’re looking at other people’s Rise-filtered view of the sunset from out the back of a driverless car to find that the very same cars have driven us into the fiery pits of Arallon, don’t say I didn’t warn you.

Photo via Andrew Kudrin/Flickr (CC BY 2.0)