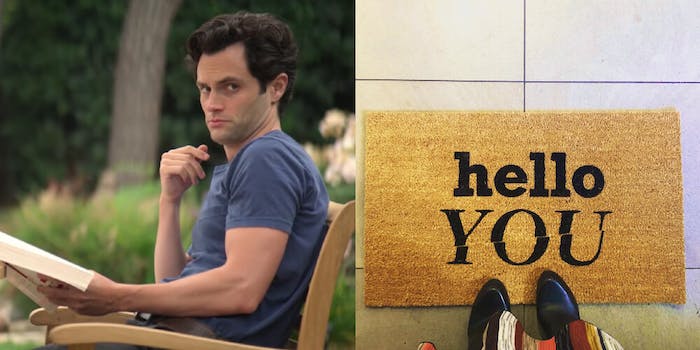 ‘You’ season 3 has already started production

Sera Gamble, one of the show’s executive producers, teased the new season on Twitter.

It’s official: Producers have started filming the latest season of the Netflix drama—and we’re totally here for it.

Sera Gamble, one of the show’s executive producers, teased the new season on Twitter.

In January, Netflix announced it was renewing the show, with Penn Badgley and Victoria Pedretti reprising their roles as Joe and Love—the soon-to-be parents. The show became a hit for the streaming platform in 2018, after debuting its first series on Lifetime.

See you soon, neighbor. YOU S3 is coming. pic.twitter.com/rCJx7K9v0P

The series features Badgley as well-read stalker Joe Goldberg. While season 1, was set in New York City, Goldberg moved to L.A. for season 2 where we find him working at yet another bookstore and living under an alias. He’s also stalking Love Quinn (Pedretti), who we later learn has more in common with him than he initially thinks.

While in an interview with Cosmopolitan UK, Gamble said she has big plans in mind for Joe in the next season.

“I will say that we have an idea for season three that is SO exciting that people talk about it in the [writer’s] room every day,” she says. “So my fingers are crossed.”

According to Entertainment Weekly, season 3 will comprise of 10 episodes. Although the series is based on the popular Caroline Kepnes books, it’s unclear how much the rest of the show will follow the novels. It’s also not immediately clear if season 3 will continue in Los Angeles, but there are already plenty of fan theories about that “neighbor.”