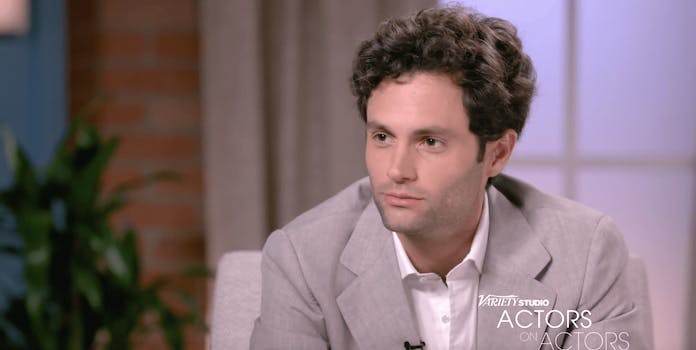 Penn Badgley: ‘You’ is about ‘how far we are willing to go to forgive an evil white man’

Actor Penn Badgley isn’t holding anything back when it comes to discussing his You character Joe Goldberg. In a resurfaced interview, Badgley told actress Gina Rodriguez that You isn’t about love, it’s about “how far are we willing to go to forgive an evil white man.”

In a “Variety Studios Actors on Actors” interview from June, Rodriguez asked Badgley how he feels about “the desire and the longing” for his character Joe, given that Joe’s “not great.”

Penn Badgley stans and fans of You are sharing their love for the actor after this interview. “UGH the INTROSPECTION, I’m in love” user @rainey_rizzzo tweeted.

“Another season of YOU, another reminder that Penn Badgley is THAT BITCH” @Jen_HEYDT tweeted.

Another season of YOU, another reminder that Penn Badgley is THAT BITCH (& Gina Rodriguez is not) https://t.co/lE4CEINE3A

“I might be in love with Penn [Badgley]” @zaconeyandw0ke tweeted.

I might be in love with Penn Badgely https://t.co/VgNUKIpHso

But as much as fans loved Badgley’s insightful comments about our fascination with conventionally attractive, white serial killers, they were equally if not more angry with Rodriguez’s response. Which was to make no comment on white men being able to get away with literal murder, and ask Badgley how he gets his eyes to look so “crazy” in the show.

“He said something so deep which deserved to be expanded upon and discussed at length and it flew right over her head. She’s so useless.” @THISisLULE tweeted.

He said something so deep which deserved to be expanded upon and discussed at length and it flew right over her head. She’s so useless. https://t.co/eo6WYmIxK6

“Gina Rodriguez has the depth of a spatula. Penn was having this deep conversation on race and privilege by himself.” @EllaBellaBleu tweeted.

Gina Rodriguez has the depth of a spatula. Penn was having this deep conversation on race and privilege by himself. https://t.co/j2BaRhjeby

Rodriguez has previously been accused of being anti-Black, and viewers felt she missed an opportunity to discuss race on a deeper level during this conversation. But unwilling to let this slide, Badgley was able to bring the conversation back to race and privilege later in the interview. When discussing how Joe is still a “sweet” guy at points in the show, similar to his character Dan Humphry in Gossip Girl, Badgley reminded us that we shouldn’t use those moments as an excuse to forgive the horrible things his character does.

“In this different context, somehow people find that it has much more depth, and they find it much more roguish and charming, and it’s like ‘yeah well it’s just because I’m killing people in the next scene,'” Badgley said. “And there’s something about that. Like maybe we’re not evolved enough yet to not be attracted to? This is the evil white man thing. You know as much as we’re progressing… the cultural norms we’re still all indoctrinated by incline us to forgive a certain type of person, namely someone who looks like myself, less so than someone who looks like you… and we keep doing backflips to figure out how we’re going to forgive him.”

Fans appreciated Badgley’s openness and thoughtfulness when discussing a complex issue such as race. “Very well said, Penn, but Gina doesn’t have the range for this conversation.” @thomeography tweeted.

Very well said, Penn, but Gina doesn't have the range for this conversation. https://t.co/JZkWQ2yAuW

“When Penn Badgley is a better ally to POC than an actual POC.” @J_Hussain05 tweeted.

When Penn Badgely is a better ally to POC than an actual POC. https://t.co/XoHDPpRU9v

“omg this whole interview he looks so annoyed w everything Gina rodriguez is saying skskdkklsals- i have no choice but to stan” @INDIEWASHERE tweeted.

omg this whole interview he looks so annoyed w everything Gina rodriguez is saying skskdkklsals- i have no choice but to stan https://t.co/MnCPoFczjQ

This is not the first time Badgley has shared his distaste for the thirst for Joe. Last year he went on a tweet-spree responding to fans’ thirsty tweets, and said definitively, on the record, that Joe is not sexy, he is in fact, just a murderer.

Then we got nothing left.

Badgley addressed these tweets in the interview as well. “I got a lot of responses on Twitter, a lot of what we like to call thirsty,” Badgley said. “So I just had this measured response like ‘hey, maybe let’s check ourselves a little.’ And I was really pleased and surprised to see how much that really elevated the conversation around it and encouraged people to have a more, maybe a deeper viewing of the show.”

Seasons 1 and 2 of You are available to stream on Netflix, but maybe fewer people will be thirsting for Joe after watching this interview.