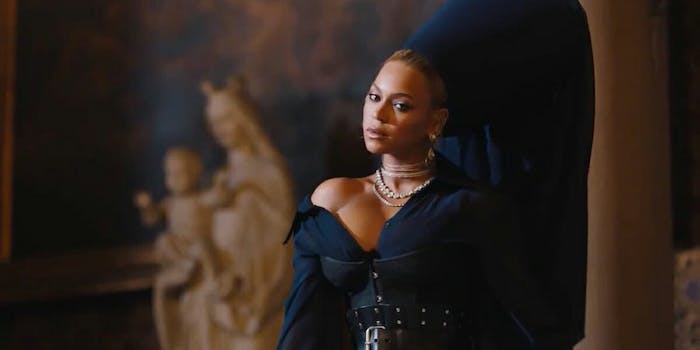 Update 2:22pm CT, March 27: According to TMZ and its multiple sources within Haddish’s inner circle, Haddish has told people that the infamous Beyoncé biter was actor Sanaa Lathan, who has denied rumors since Monday. Lathan is famous for roles in Love & Basketball and Alien vs. Predator.

A new GQ interview with Tiffany Haddish has the celebrity rumor mill aflame trying to figure out who bit Beyoncé at a party. You read that correctly.

The feature-length profile of the superstar comedian reveals a lot of things fans probably hoped would be true. She’s a blast to go on a whale watch with, she’s using her money to care for her mother and grandmother, and she has some questionable at-home remedies for the common cold. But one tidbit from the piece has gossip hounds shaken to their core: A mystery actress apparently bit Beyoncé on the face at a party recently, and Haddish witnessed the whole thing.

Snippets of the story had already made their way to the press in recent months. Haddish and Beyoncé took a selfie together that night, and Haddish explained at the time that there had been some kind of drama at the event, but she didn’t go into specifics. So the face-biting part? That’s brand new information.

According to a post from the Cut’s celebrity gossip column back in February, there were a number of other celebrity party attendees that night—Rihanna, James Franco, French Montana, Queen Latifah, and actresses Sanaa Lathan and Sara Foster are all named.

Since only two of those people would probably be described as “an actress,” sleuths zeroed in on Lathan and Foster’s Instagram accounts, bombarding the comments with angry messages and bee emoji (the signature emoji of Beyoncé’s fandom, the Beyhive).

Both Lathan and Foster have since denied the biting allegations.

“Y’all are funny,” Lathan tweeted Monday evening. “Under no circumstances did I bite Beyoncé and if I did it would’ve been a love bite.”

Y’all are funny. Under no circumstances did I bite Beyonce and if I did it would’ve been a love bite 💋

Foster shared a screenshot of a press email asking for a comment and joked, “Flattering that anyone thinks I could get this close to Beyoncé.”

Flattering that anyone thinks I could get this close to Beyoncé.

Media Takeout apparently suggested that partygoer Taraji P. Henson could have been the culprit, but Haddish shot that idea down herself on Twitter Monday evening.

Documented Twitter expert Chrissy Teigen initially tweeted that she thought she knew who the biter was, and then later corrected herself, admitting that she “*never* would have guessed” who the real person ended up being.

With the amount of manpower being applied to this mystery, it still feels possible that someone might actually reveal the biter’s identity. But for now it looks like the only people who know are Haddish, Beyoncé, and Teigen—and they aren’t spilling.