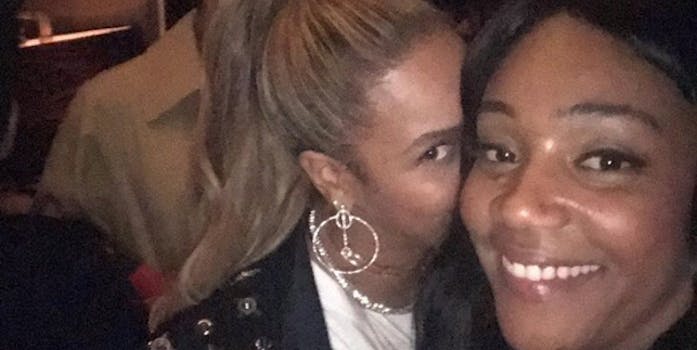 Everyone was their best self here.

Tiffany Haddish and Beyoncé are probably both pretty high up on America’s list of Fantasy Celebrity Best Friends, so when the two met in December and posted a selfie to commemorate the occasion, fans were understandably excited.

In an interview with Vulture this week, Haddish explained how the picture came to be, and it’s honestly nearly as good as her iconic Will Smith and Jada Pinkett Groupon story.

First of all, here is the selfie in question:

In the interview, Haddish explains that she and Beyoncé happened to be standing near each other at a party while some kind of scene unfolded. Haddish jokes that she’s “not at liberty to say what had went down at the party” but that “something had went down with somebody at the party.” In other words: There was some tension in the room. Beyoncé and Haddish hadn’t introduced themselves to each other or spoken before, but when Bey noticed Haddish standing nearby and thinking about getting involved, she told her to “Hold up.”

OK, so what had happened was, something had went down with somebody at the party, right? I’m not at liberty to say what had went down at the party, but Beyoncé was just telling me to have a good time, and I was like, “No, I’m gonna end up fighting this bitch!” She was like, “No, have fun, Tiffany,” and I said, “I’m only going to have fun if you take a selfie with me.”

Wow, perfectly played. Haddish basically told Beyoncé, “I will not fight this woman if you promise to take a pic with me.”And Beyoncé obliged! Haddish explained that after the photo was taken, the pop star introduced herself and admitted that she’d recognized Haddish from afar:

And just like that, we get a meet-cute with two of America’s sweethearts being their best selves. Beyoncé keeping the peace during drama at an industry event, and Haddish finessing exactly what she wants out of any situation.