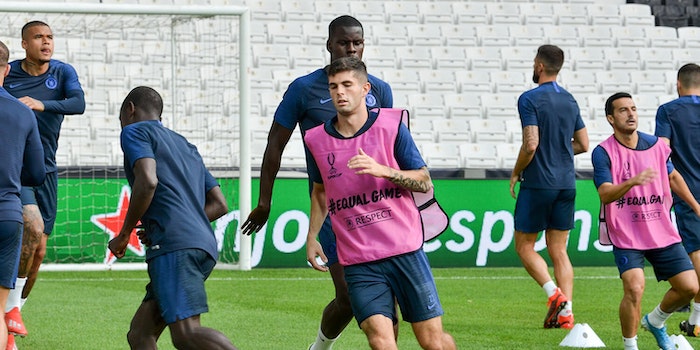 How to stream Chelsea vs. Lille

Chelsea and Lille will look to recover from opening day Champions League losses.

Two American stars in the making have found their way to Champions League-qualifying teams. Tim Weah, who’s already had stops at PSG and Celtic, is officially with Lille now, though he’s only made two appearances with the first team in Ligue 1 so far. Christian Pulisic, in one of the most-watched moves involving an American player in years, moved from Dortmund to Chelsea over the summer. He’s made four appearances in Premier League matches so far but has been missing from the lineup in recent matches, causing all sorts of alarm bells to go off for American soccer fans gauging his progress. The Americans provide just one storyline for this Champions League tilt happening Wednesday.

Here’s everything you need to know to live stream Chelsea vs. Lille, including what to watch for on the pitch.

Chelsea vs. Lille: What to watch for

Chelsea is not quite where it wants to be in Premier League play right now. After seven weeks, the team’s up to sixth place—though that is a considerable jump from 11th, where Chelsea sat before this past weekend’s 2-0 victory over Brighton. There are talented young players in the squad, including a pair of players in Tammy Abraham and Mason Mount who could be instrumental on future World Cup squads. But it’s also a team that may be in transition this season as it learns Frank Lampard’s system. Its 1-0 loss to Valencia in the Champions League opener wasn’t an ideal start, but a result against Lille will help fill up the progress bar.

Lille is fourth in Ligue 1, gripped in the usual battle with PSG for French domestic supremacy. Other than Weah, names you might recognize on the current Lille squad include veteran French striker Loic Remy, who spend part of his career at Chelsea, and Portuguese winger Renato Sanches, who had a stint at Bayern Munich not so long ago. But given Lille was blanked 3-0 by Ajax in its Champions League opener, it’ll need to find goals from at least one of its players if it wants to stay in contention for the knockout rounds.