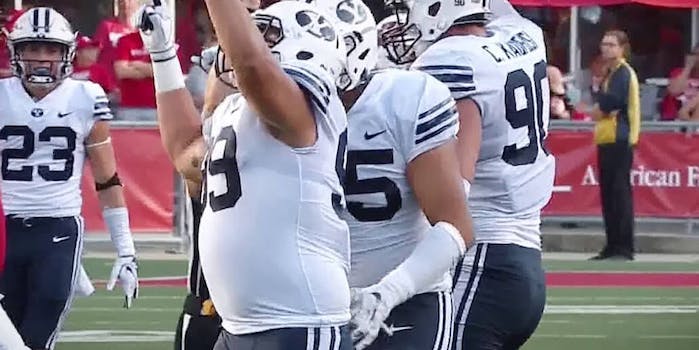 How to stream BYU vs. Toledo

The Cougars are taking all comers in 2019, and their last clash with the Rockets was a thriller.

Bringham Young head coach Kalani Sitake takes his team East for another consecutive major clash—but college football fans will need an ESPN+ stream to watch. Below is everything you need to know to stream BYU vs. Toledo.

For the 2-2 Cougars, who have competed sans a conference since 2011, it’s been a grindhouse. As the Salt Lake Tribune notes, they’re the only team in college football to open their season with four straight Power Five opponents. After hard-muscled losses to Utah and Washington to pair with overtime wins against Tennessee and a suddenly surging USC, the Cougars are back on the road.

The Toledo Rockets host BYU for the first time on Saturday in this sneaky-fun new rivalry. Their 2016 maiden meeting finished 55-53 so casual fans will want to watch their tickers as it barrels toward the fourth quarter.

BYU Cougars vs. Toledo Rockets will be available to stream on ESPN+.

BYU vs. Toledo live stream: What to watch for

The 2-1 Rockets opened the season with a tough loss to Kentucky but are coming off a big 41-35 road win at Colorado State. In that thriller, running back Bryant Koback enjoyed a career-best 228 yards on the ground. Signal-caller Mitch Guadagni also ran for 119.

For the Mid-American Conference heavyweights, that’s good news: BYU ranks 116th nationally when it comes to stopping the run.

As Vanquish the Foe notes, this is the first time this season that BYU is favored by Vegas. Yet BYU star running back Ty’Son Williams is done for the season with a torn ACL—and according to Odds Shark, the Cougars are only a 2.5-point road favorite, though they’re also 7-2 against the number in their last nine.

All signs are pointing to an offensive fireworks show with pinball energy.