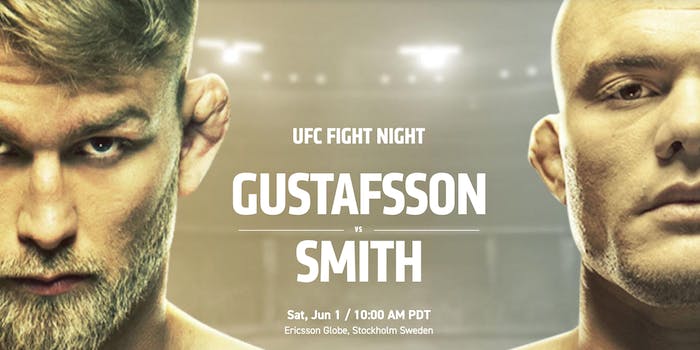 How to stream UFC Fight Night 153 for free

This fight 'night' is worth waking up early for.

American UFC fans have another early Saturday ahead of them. UFC Fight Night 153 takes places in Stockholm, Sweden, at the Ericsson Globe Arena, which means festivities begin at 10am ET with the prelims, followed by the main card at 1pm ET.

But even if the main card coincides with breakfast (or lunch), the line-up for Fight Night Stockholm is worth watching. The main event sees two accomplished light heavyweights face off, as Sweden native Alexander “The Viking” Gustafsson (18-5-0) takes on Anthony “Lionheart” Smith (31-14-0). This fight marks the second time that Gustafsson has headlined a UFC event in Stockholm: In May 2017, Gustafsson KO’d Glover Teixeira in a five-round barnburner that earned a Fight of the Night designation.

So knock the sleep out your eyes and gear up for some early MMA action. Here’s everything you need to know to live stream UFC Fight Night 153 for free.

Gustafsson vs. Smith: How to watch UFC Fight Night Stockholm for free

For UFC fans, there’s only one streaming service that will provide the mixed-martial arts coverage they crave: ESPN+. UFC aficionados who subscribe to ESPN+ gain an unparalleled resource to follow MMA and can binge on other premium ESPN content.

What prompted the current arrangement? In May 2018, ESPN inked a $1.5 billion deal with UFC to carry 30 Fight Nights, with the company selecting 20 of those events to run on ESPN+, including Fight Night 153. ESPN and UFC then extended their partnership in January 2019 to make ESPN the home of all UFC pay-per-view events, which allows active ESPN+ users to purchase any PPV UFC event for $59.99 per event. UFC fans who don’t have an ESPN+ account but wish to subscribe can gain a year’s worth of the streaming service with one $79.99 PPV purchase. That’s a pretty sweet deal.

ESPN+ works as an extension of the ESPN app, unlocking exclusive features and live events. All you have to do is download the app on your streaming device of choice (see the full list above) and subscribe. If your cable or live TV streaming package also includes ESPN2, you’ll be able to watch the prelims and the main event all from one convenient location.

Gustafsson vs. Smith: Why it matters

One name forever links both Alexander Gustafsson and Anthony Smith: Jon Jones. As Sports Book Review details, fights with the current light heavyweight champion Jones have come to define both Gustafsson’s and Smith’s careers. The fight that arguably kickstarted Gustafsson’s career, UFC 165 in 2013, came against Jones, as he narrowly lost in a five-round unanimous decision that outlets like FoxSports.com, ESPN, and Sherdog considered the fight of the year. (He lost to Jones again at UFC 232 in 2018). At UFC 235, in a fight for the light heavyweight belt, Anthony Smith went toe-to-toe with Jones before succumbing in the fifth round.

While the stakes will be lower in Stockholm, both Gustafsson and Smith have shown that they’re two of the better fighters in the weight class. Both come into the bout with top-five rankings and are seeking a victory to continue burnishing their résumés. Despite Smith’s last fight garnering him a loss (against Jones at the aforementioned UFC 235), “Lionheart” is 6-2 in his last eight fights, stretching back to 2016. In that time he’s notched three KOs, two TKOs, and three “Performance of the Night” honors. Smith will be chomping at the bit to show up Gustafsson on the Swede’s home turf. Gustafsson’s performance over his last eight (which dates back to 2012, as he only fights about once per year) is more mixed, as he’s amassed a 4-4 record, but he’ll certainly have the Scandinavian crowd behind him.

Considering their ages (both Gustafsson and Smith are in their 30s), a loss at Fight Night Stockholm would perhaps end Gustafsson’s or Smith’s title ambitions. Gustafsson, in particular, might hang it up if the result isn’t encouraging. “The Viking” already retired once in 2016 and he hinted to MMA Fighting earlier this year that a disappointing result against Smith might suggest that “maybe I don’t have it anymore.” Regardless, it’s safe to say that Gustafsson and Smith know that a win in Stockholm is the only way back to potentially challenging Jones for the title.