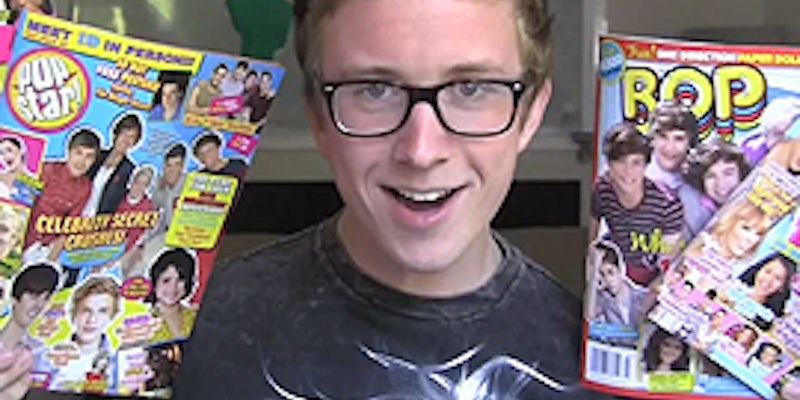 Tyler Oakley is a bigger fangirl than you

The YouTube star opens up about vlogging culture, shipping, and the responsibility that comes with his social reach.

Rising star Tyler Oakley may have one of the loudest voices on YouTube these days.

A self-proclaimed “fangirl,” Oakley’s humor, talent, and devotion to pop culture have captured the hearts of over half a million followers on YouTube, Tumblr, and Twitter. Oakley is rapidly ascending to the status of vlogger elite, frequently doing guest appearances on YouTube’s What’s Trending, hosting red carpet events, and hanging out with the likes of Lady Gaga, Perez Hilton, and YouTube’s own Kingsley. (The ship name, by the way, is Tingsley.)

Oakley started vlogging as a freshman at Michigan State University. Because of his honesty and commitment to talking about his identity as a queer man, he quickly gained popularity for his videos, in which he tackles everything from queer politics to the constant elation of fangirling Glee’s Darren Criss and the lads of One Direction. Along with doing a widely publicized video for It Gets Better, Oakley has also done extensive work with the Trevor Project, a nonprofit working to prevent bullying and suicide among queer and genderqueer youth.

Oakley is part of a growing YouTube community whose success stretches across multiple platforms and ranges of conversation. Like many of his contemporaries, Oakley has largely defined his own niche and created his own brand through an awareness of his audience and a commitment to sharing his life with them.

He discussed with the Daily Dot that process, keeping it real, and of course, the essence of good fangirling.

DD: You and the Vlogbrothers both started your vlogs as a way to keep in touch with the people you loved, and from there the vlogs evolved as you gained an audience. What changes as you grow more aware of yourself within a community space?

I feel good about that evolution. I’ve been on YouTube for over five years now, and I’d be embarrassed if there WEREN’T obvious changes in my opinions, attitudes, sense of humor, my look, how I edit, and just about every other factor. I want to always be growing. That’s how you get better.

DD: You’ve said that you want to be as open and honest as you can on your vlogs, but I’m sure you’ve had experiences with people who use that honesty as fodder for attacks and ridicule. What helps you stay committed to being real?

I’m 100 percent me because if there’s one kid who might find me in a random YouTube search and feel less alone in the world seeing me achieve my dreams by being who I am, then I owe it to them to be myself.

I’ve seen people claim that I’m putting on a lisp to seem gayer or that I talk about One Direction because it might get more views—I just don’t have time for that. My biggest priorities include living my life to the fullest, knowing and working toward my goals, and using my platform to reach and connect with people in meaningful ways. That simply leaves no time for being or acting as someone that I’m not. And of course the attacks do get to me, sometimes… because the loudest people online are the negative people. I just find peace in the fact that I’m living my dream and doing good, and they’re sitting at home complaining about it.

DD: Your fanbase is currently torn on who it ships more, you/Kingsley or you/Darren. Guide us!

Oh lord! This is a tough one. That’s one thing I’ve found about people who watch YouTubers, and specifically, people who watch my videos—if it fits, it ships… and EVERYTHING fits. I can tweet at the most random YouTuber, and someone out there will ship it. I personally ship me and @TacoBell. (But for real, I’d give anything for my OTP (Tyler/Darren) to be real.)

DD: Does Darren watch your videos?

I’ve never asked! The few times we’ve chatted face to face have been at charity events, and it would feel pretty self-indulgent to ask something like that. From the warm and adorable way he greeted me the last time we ran into each other, he definitely at least knows who I am. That’s more than enough for me!

DD: You can only sing one [Stephen] Sondheim musical for the rest of your life; which one is it?

So many to pick from! The music from Into the Woods will always have a special place in my heart though.

DD: Did your homophobic aunt ever respond to your open letter to her?

Nope! Haven’t seen her since, either. Not really worried about it.

DD: There’s been a lot of controversy lately over YouTube networks like Machinima exerting control over YouTube creators. Do you think there’s a danger of creative content in the community being stifled by corporate interests?

Not all YouTube networks are evil! I’ve heard a LOT of drama about a LOT of networks, but I’ve been lucky enough to be with one that really values the talent with which they work. Since I signed with Big Frame, my entire experience has been nothing but positive and rewarding in so many ways. Can’t say enough good things about them.

DD: Why did it take you so long to get a Tumblr?

I don’t know! Tumblr was just one of those things where I didn’t get it until I made an account… and then as soon as I did, I realized what I was missing out on. Nowadays, I can’t get away from it! It’s great for me especially because I really have free range to use it as a blog exactly how I want, and people don’t have to go out of their way to see my updates. Most of the time, it’s funny stuff I find around the Internet, with a bit of my own stuff sprinkled throughout. It’s gotten to the point where people know my Tumblr’s “voice” so well that they send me things that they think belong on my blog—and most of the time, they’re right!

DD: I just did an article about how “omg i can’t even stop it with your face” is the new way to express a romantic ideal. You adopted that language even before you joined Tumblr, when you identified yourself as a fangirl. Was that a conscious choice?

It all happened very organically. When it’s the majority of what you read, it becomes the majority of how you speak. So the more I engulfed myself with the Tumblr community, the more I picked up the language—and how I would type and chat with people… and then when I would make videos, it just is… how I talk.

Letting your pure excitement for someone or something go wild. 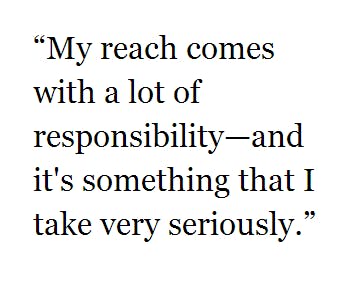 DD: Recently on Tumblr there’s been a wave of discussion centered around what some members of the community feel are harmful racist, sexist, and transphobic statements that you’ve made in the past—for instance, using the word “tranny” and dismissing claims of cultural appropriation. Do you think these incidents are being overstated?

My reach comes with a lot of responsibility—and it’s something that I take very seriously. Of course I wouldn’t use the “t” word now, because I know better. The problem with the “social justice” mindset on Tumblr is that it’s become a witch-hunt, and if you want to make anyone look bad in a certain light, keep searching. You’ll find something that can be twisted. And once you find it, that’s it—they can’t be anything but racist, or sexist, or whatever you want to make them out to be.

For me personally, as I go through my journey and as my career picks up, I’ve done nothing but reassess my priorities, my character, my opinions and my values—and I’m grateful that through the busyness of my successes, I’ve had time to reflect on my points for improvement. I don’t think that I should ever settle or feel like I’ve reached a plateau in how I’m acting on and thinking about each of those things. Everyone has done something stupid or said possibly offensive things in their past, and as long as what someone is doing and saying NOW reflects a more positive and supportive state of being than what they’ve done in the past, I’m not OK with villainizing them.

DD: A huge ongoing criticism within the queer community is that Dan Savage gets to define what being “gay” is and isn’t. You’ve spoken out against a “one size fits all” definition of gay men in the past, but how do you feel about the claim that the gay male experience doesn’t leave room for anyone else?

I’ve always believed that the Internet is a platform to speak your mind that anyone can take advantage of—with a range as drastic as Deepak Chopra to Ann Coulter. I do my best to promote people who I think provide a voice from a different aspect of the queer community that I don’t necessarily have experience in, but at the end of the day, all I can provide is my own viewpoint. It resonates with some people, it doesn’t with others.

DD: The Trevor Project is obviously very important to you. Has your involvement with it changed the way you think of yourself and your role in the lives of your fans?

The Trevor Project helps me realize the potential in everyone. Every life is so important, and you never know what someone can go on to accomplish in the world if you give them a helping hand when they’re down and out. I want anyone who watches me to know that there are people who care about them, and one of the bravest things you can do is reach out for help. The Trevor Project can help.

Correction: Tyler Oakley did not attend the University of Michigan. He started vlogging at Michigan State University.