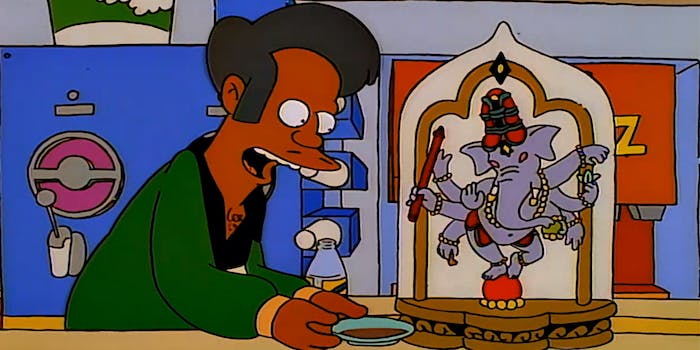 ‘The Simpsons’ blasted for response to Apu controversy

Many think this missed the mark.

Twenty-nine seasons in, American institution The Simpsons is drawing mainstream backlash for its depiction of Apu. The Kwik-E-Mart proprietor may be a beloved character, but the Indian stereotypes used to flesh him out have been criticized by comedian Hari Kondabolu, among others. Sunday night, The Simpsons responded—and the show succeeded in upsetting progressives on Twitter.

As Lisa and Marge tell an old bedtime story, Marge updates it to be less offensive. She sands it down so much that it stops making sense. (The lead character becomes “cisgender girl,” and she fights for net neutrality.) Shortly after, the pair take the meta proceedings a step further to leave no bones about what they’re referencing.

“Something that started decades ago and was applauded and inoffensive is now politically incorrect. What can you do?” Lisa says.

“Some things will be dealt with a later date,” Marge replies.

The two look into the camera. A framed photo of Apu also flashes on-screen, and it appears to be signed with “don’t have a cow,” Bart’s signature late ’80s catchphrase.

"Something that started decades ago and was applauded and inoffensive is now politically incorrect… What can you do?" pic.twitter.com/Bj7qE2FXWN

For many, including Kondabolu and his podcast co-host W. Kamau Bell, this acknowledgment was a non-apology that warranted social media ire. His documentary The Trouble With Apu discussed the character’s problematic stereotypes with South Asian actors and comedians, and, in December, Apu voice actor Hank Azaria promised the show would circle back to the controversy.

Wow. “Politically Incorrect?” That’s the takeaway from my movie & the discussion it sparked? Man, I really loved this show. This is sad. https://t.co/lYFH5LguEJ

I think the fact that they put this "argument" in the mouth of Lisa's character, the character who usually champions the underdogs and is supposed to be the most thoughtful and liberal, is what makes this the most ridiculous (as in worthy of ridicule) and toothless response.

They should and could have done an entire episode with Apu responding to @harikondabolu's movie. They wouldn't have to agree with him but they missed a huge opportunity to add in more layers and be topical. Instead, they went the lazy route and did this. https://t.co/ciUq39A4t6

Several others have supported The Simpsons for pushing back, but a look through Twitter reveals that they are mostly white dudes.

The Simpsons has been on the air over thirty years, so why is Apu suddenly so controversial? Maybe it's because this political correctness, social justice, offence taking culture has gone too far. He's a cartoon character. Get a fucking grip. #TheSimpsons

The Simpsons found its vitality by roasting the suburban American values that the baby boomer generation embraced during the ’80s. Thirty years later, humor and family dynamics have changed, and the glaring blinders and biases that have molded beloved comedies—just check Molly Ringwald’s New Yorker essay on her John Hughes movies—reveal out-of-place, not-so-pleasant attitudes.