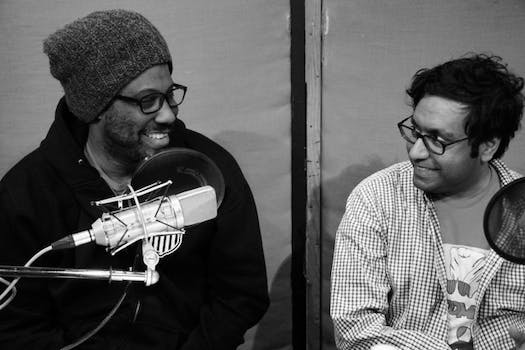 We’re still processing 2016. The Cubs won the World Series. Your favorite icons died. There were catastrophes. There was Brexit.

And then Donald Trump became president.

In the lead up to a reality TV star becoming the most powerful man in the world, political podcasts went from just another genre of a weird subculture to a leading medium for institutions and individuals to share information, opinions, and influence. In the wake of the election’s mayhem, these shows are more critical than ever.

This week the Daily Dot sat in with leading voices in this arena, the comics behind Topic’s Politically Re-active, W. Kamau Bell (CNN’s United Shades of America) and standup Hari Kondabolu. (Bell was on the phone, while Kondabolu was with me in person.) We discussed their new season launching on March 29, Trump’s victory, and why the show is ultimately about two friends who happen to cover the news.flm

“First Look came to me and said ‘Do you want to do a political podcast?’ and I was like ‘I’m really too busy,’” says Bell. “Then they said, ‘Well maybe you could get an occasional co-host, maybe one week Hari could do it.’ And I said, ‘Oh well if he does it every week, I’ll do it.’ I just like talking to my friend.”

The show, which was previously hosted on Panoply but is now moving to Earwolf, is a combination of color commentary from Bell and Kondabolu, two engaged and enlightened comedians you’d be well-served to pay attention to. There are interviews with influential and interesting guests, funny outtakes, explainers done with the use of high-quality and well-mixed interstitials, and the use of powerful and nostalgic political clips from the last few decades. Things that the listener remembers but wouldn’t necessarily recall on their own, including the inevitable appearance of their favorite David Duke/Trump clip.

And it’s proven popular, topping out at No. 15 on the overall iTunes charts last summer, and at one point No. 2 in the news category.

A goal of Bell and Kondabolu is to come together and have a conversation that moves the dialogue forward. They maintain a special focus around providing opportunities to people who aren’t often heard in the mainstream media.

During  season 1 they hopped on the phone with writer, filmmaker, and indigenous advocate Benalex Dupris to discuss the #NoDAPL movement.

“You don’t want to have a conversation where at every moment you’re like, ‘Yep, I think the same thing you think, you keep on saying everything I believe.’ That’s a boring conversation,” Bell says. “We have to be able to have the awkward spaces.”

In season 1, Bell and Kondabolu chat about everything from dog whistling and third-wave feminism to Standing Rock and the Black Lives Matter movement, with notable nods to gerrymandering, the Olympics, and the effects of the election. All of this is done through the lens of their friendship, and you can’t help but laugh along with their back and forth.

The duo recognizes that they’re really good at taking wonky matters and bringing humanity to them, and they use clever editing techniques to enhance those moments.

“I don’t see us as trying to be educational,” says Kondabolu, “but if that’s going to help us with the conversation, of course we do it.”

In season 2 they hope to cover topics that are more issues-based and initially seem boring, like the electoral college.

“One of our sneaky hits from last season was David Daley talking about gerrymandering, a super wonky nerdy topic but one that people liked because a lot of regular people aren’t thinking about it,” says Bell. “I think now that we know we’re going to be around for a bunch of episodes people can expect us to really take on some of those wonkier policy infrastructure ideas.”

Past guests have included Kathleen Hanna, dream hampton, Robert Reich, Van Jones, Jake Tapper, and Roxane Gay, among dozens of others. If The Weeds is meant to highlight policy issues, Politically Re-active is meant to chat about the people those policies affect.

Listening back to episodes (season 1 ran June to November 2016) is tough, and includes moments difficult to hear if you’re a liberal. “Obviously we can’t have Donald Trump be the president,” says Lindy West in an August episode. “It’s going to be amazing when he loses, just so explosively and dramatically and like a pathetic little wet, hair-covered turd.”

And speaking of Trump, the podcast will be occupying a much different space now than it did during election season.

“Let’s be clear, I don’t think it is Trump’s America. I think the popular vote proved that, I think the reason why it’s Trump’s America is because of leftover slaveowner math and I think we have to do a better job of figuring out how to dismantle that slaveowner math, the Electoral College,” Bell says, illustrating some of the biting conviction the show is known for.

A part of me can’t help but recall conversations about the echo chamber in political coverage from this past year. Are we in a world where the left is only speaking to the left and the right is doing the same?

“I don’t think it was an echo chamber. We ended up voting Green,” says Kondabolu, referring to the fact that he and Kamau voted for Jill Stein, a statement that got them both a fair amount of flack after they announced it. “We disagreed with a lot of the things that were said by both sides. We were having a nuanced discussion.”

In 24 full-length episodes released last year, the pair only managed to book one guest who identified herself as Republican, the conservative commentator S.E. Cupp. Both hosts have said they’re actively looking to book more conservative guests this season, and provided examples of who they’d like to chat with.

But no matter how wrong so many people got it this past year, it’s refreshing to hear the optimism that comes with a show doing its best to spotlight America as it really is. On the first episode after Nov. 8, Kondabolu and Bell spent five whole minutes cataloguing and congratulating non-white male candidates elected to Congress, states legalizing marijuana, the 22nd Amendment to the constitution, minimum wage increases, and soda taxes.

One of the differences between them and legacy media is that they’re always willing to cop to misfires. It’s not uncommon for the two to reply to comments from their listeners, or comment themselves on things they weren’t aware were issues in the first place, or simply admit when they got it wrong.

“As the prophet Drake says,” says Bell, “What a time to be alive.”

Season 2 of the show will feature guests Patrisse Cullors, Kate Schatz & Miriam Klein Stahl, Aasif Mandvi, Michael Skolnick, Jack Rokove, Akilah Hughes, and Angela Rye, among others. When I ask Bell and Kondabolu their plans for this coming run of podcasts, I receive exactly the kind of response I expected.

Joking, I ask if we’re on the record.