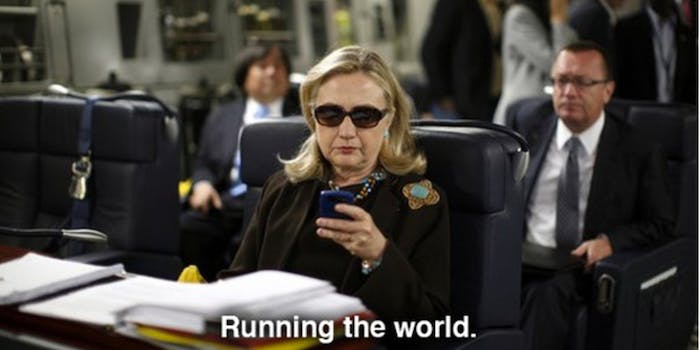 Just who was Hillary Clinton texting while sitting on that plane wearing those shades?

You might have seen a photo of Hillary Clinton checking her phone in a military plane, posted all over Facebook and elsewhere. But now we know who she was texting and precisely what she was saying.

Or at least we can guess.

On a new parody Tumblr titled Texts from Hillary, we see that she has Sarah Palin, her husband Bill, and obviously Pres. Barack Obama in her contacts list.

The premise of the blog, created by popular Tumblr user i’mwithkanye,  is simple, unlike Clinton’s job of being secretary of state. A less-than-serious image is juxtaposed over Clinton’s photo of her looking like a badass, sitting in a military plane and seemingly controlling the world from her Blackberry.

Although there are only three posts, the one with Palin is our favorite. It shows the two in very different jobs. Palin is holding a baby while on the phone. It’s captioned, “We almost had the same job…” and the caption on Clinton’s picture reads “Lolz, bitch please.” That racked up more than 1,000 notes.

The picture of Clinton resurfaced on various Facebook and Twitter accounts Wednesday, but it’s hard to pinpoint why. Popular Twitter users, like Grantland’s Katie Baker tweeted the photo calling Clinton “a pimp.” Others preferred to call her “HBIC,” or head bitch in charge, which is true! And we mean that in a good way.

The photo is part of a larger profile of Clinton in a Time magazine article when she visited Libya last October. The caption simply says, “Clinton checks her PDA in sunglasses upon departure in a military plane from Malta, bound for Tripoli on October 18, 2011.”

Pretty serious stuff so we prefer imagining her text smack talk to Palin or Obama.