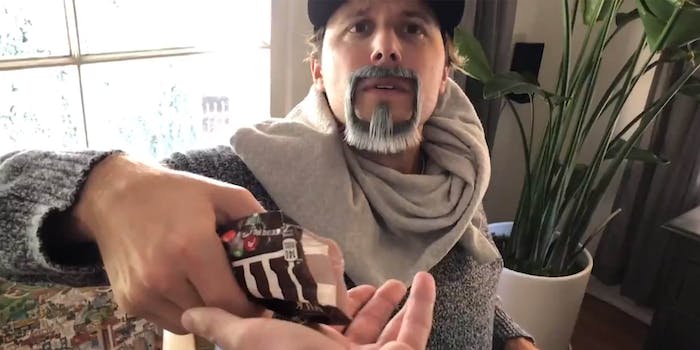 ‘Succession’ but with M&Ms is a pitch-perfect parody

It's a masterclass in Roy family impressions.

Succession‘s season 2 finale brought out the theories and memes, as well as our hopes and dreams for season 3. Without spoiling too much, the show’s No. 1 boy proved he could be a killer. Could he still be “Daddy’s No. 1 Candy Baby”?

Succession but everyone wants some of Logan's M&Ms pic.twitter.com/pTxIyXWen4

Cahn tells the Daily Dot he “just thought it would be funny to take their family dynamic and frame it in the most basic and CHILDISH way—as little children who can’t even buy their own M&Ms.”

Cahn says he started experimenting with one impression, but the rest came naturally: “A few weeks ago I was walking around my apartment doing Kendall’s pathetic ‘Yeah, okay,’ and then tried Tom, which consisted of just saying ‘Shiv’ and pointing out my chin slightly. I knew I could do Greg without even trying because his cadence is so consistent.”

Asked if he has a favorite character, Cahn responds: “TOM!!! He’s such a puppy.”

This clip pairs perfectly with another recent parody: Demi Adejuyigbe’s take on the Succession theme song, which will likely replace the actual theme song in your head.

not trying to start a feud or anything but I’m a little annoyed @HBO & Nicholas Britell asked Pusha T to write lyrics to the Succession theme, since they asked me to first and turned my version down https://t.co/MUywcSIYzq pic.twitter.com/q8OLy52krZ

Who will get daddy’s candy and kiss in season 3? Unfortunately, we’ve got to wait a while. So just watch these on repeat.