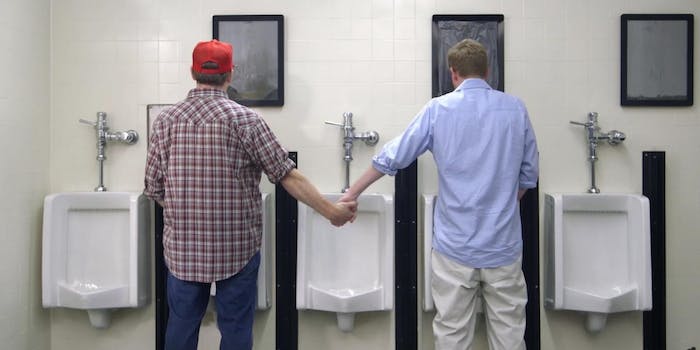 Mike Lars White’s short film about a man having difficulty with urinating in public, Steve’s Problem, won Best Narrative Short at the Albany FilmFest, Best Short Film at the Idyllwild International Festival of Cinema, and was an official selection in seven other festivals. Now, it’s available to watch (and for free!) on Vimeo.

I expected a short film about a man with urinal stage fright to cover fairly straightforward, well-trodden territory. But this short had garnered international acclaim, so I had to give it a go. And I’m glad I did.

Yes, it’s about peeing, and the first few minutes are the exact humor you’d expect—as the titular Steve stands at a public urinal, he can’t seem to muster up a stream, and he’s all sorts of awkward over it. From there, though, things blast off into wonderfully (and world-traversing) surrealistic realms and never look back, with an ending so great that it’s taking great restraint to not soil, er, spoil it.

In the end, Steve’s Problem is about a lot more than just peeing in public—it’s about growing up, letting go (on multiple levels), and it’s maybe even a little Randian. I’m half-joking about that last part, but the truth is—if you really wanted to—you could extrapolate all sorts of philosophical ramifications from White’s film about peeing while other folks are around.