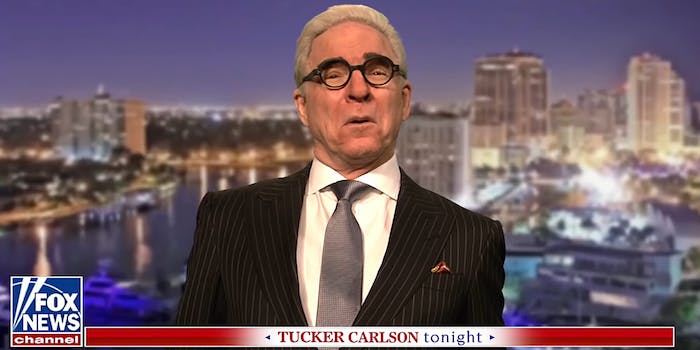 The comedy legend remixed one of his signature catchphrases.

You have to feel for the Saturday Night Live team, which had to rewrite the cold open on Friday after Roger Stone was arrested as part of special counsel Robert Mueller’s investigation. Luckily, Steve Martin used to work here.

The comedian stepped in to portray the disgraced former Trump advisor on Saturday, appearing as part of a Tucker Carlson parody.

McKinnon’s Ross should have been the sketch’s centerpiece, but Martin in glasses and a Northeastern accent continued a recent tradition of celebrity guests playing members of President Donald Trump’s inner circle.

“What a fun couple days, I’m loving the ride,” Martin’s Stone riffed. “Seven felonies! … How cool is that?”

Like Alec Baldwin as POTUS or Matt Damon as Supreme Court Justice Brett Kavanaugh, the impressions are high-profile and sufficiently amusing. But there isn’t really a good joke in there. The celebrity surprise is the gag, and the unconventional real-life talking points are the punchlines. Martin at least offered a fun “two wild and crazy guys” callback, as the New York Times noted, and remixed the line here as “I’m just a normal and straightforward guy.”

Making fun of the Trump administration remains a surreal comedic challenge, but at least McKinnon proved it can be done.