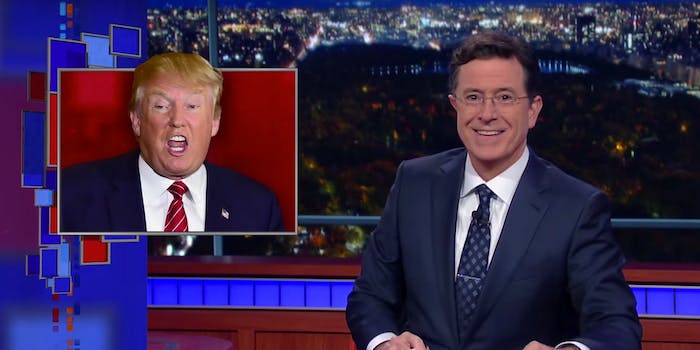 He takes a stab at being NostaDonald.

Donald Trump isn’t just running for president. He also possesses the world’s greatest memory and the ability to tell the future like a “NostraDonald,” according to Stephen Colbert.

With Thanksgiving around the corner, Colbert is thankful for Trump—mainly because, without the boisterous businessman who is currently leading in the polls, Colbert and the other late-night hosts would have nothing to discuss. Trump has had fact-checkers working overtime on a claim that he saw thousands of Muslims in Jersey City, New Jersey, celebrating after 9/11. Not only has he doubled down on that debunked claim, but he said that his 2000 book predicted Osama bin Laden’s threats to America—which anyone probably could have predicted based on news headlines.

On The Late Show Tuesday night, Colbert took a stab at “predicting the predictable,” which will certainly have us looking back in amazement at just how right he got it, à la Trump.

“No matter what he says or does, Donald Trump will still do pretty well in the polls,” Colbert said in a prediction so spot-on that it worked as both a joke and a deadly serious statement.