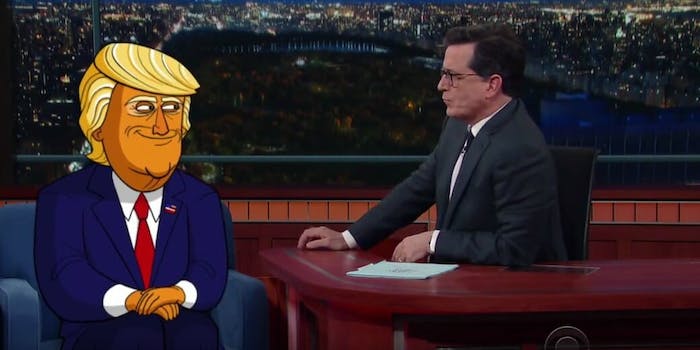 Ten episodes have already been ordered.

Stephen Colbert, who has seen his late night ratings soar since the election of President Donald Trump, is expanding his Trump-bashing empire into premium cable.

As announced by Showtime, via Variety, Colbert will executive produce a satirical animated series that rotates around Trump, the White House, and his family.

According to Showtime, which will host the 10-episode season, the series will show the “tru-ish adventures of Trump’s confidants and bon vivants—family, top associates, heads of government, golf pros, and anyone else straying into his orbit—intrepidly exploring their histories and their psyches, revealing insights into what makes them so definitively Trumpian …It’s a workplace comedy where the office happens to be oval; it’s a character study in search of character, as seen through the eyes of an imaginary documentary crew.”

Since Trump was elected president, Colbert has seen his stock rise in the late-night talk-show industry. Colbert is constantly blasting Trump, and after spending time in Russia last month, Colbert’s ratings lead has widened significantly over Jimmy Fallon’s The Tonight Show.

It’s clear the election of Trump—and Colbert’s constant vitriolic, yet humorous response—has been a major breakthrough for The Late Show. Now, Colbert is going the animation route.

“I know a lot of people wanted to do this, and I’m honored that the Cartoon President invited our documentary crew into his private world,” Colbert said in a statement. “I’ve seen some of the footage, and I look forward to sharing the man behind the MAGA.”

Colbert fans have already seen a preview of what might be in store for the show.

The series has not been named yet, but the network said that in order for current events “to play a role in the colorful exploits of Trump and his band of others,” the turnaround time for production will be quick.