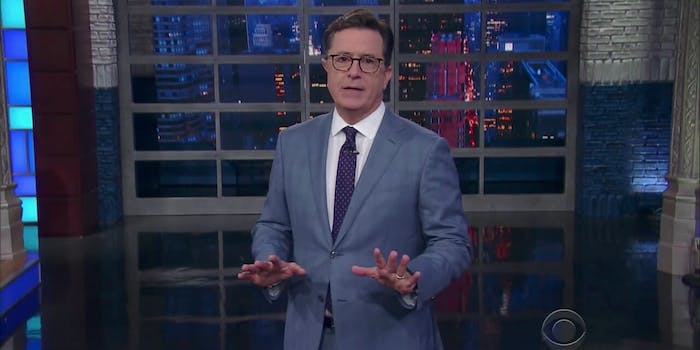 The Russians were really big fans of him.

Stephen Colbert is back after he visited Russia last week, and although he made headlines for saying he was considering a run for president in 2020 it was far from the only interesting thing that happened.

For one, he said that intelligence—both Russian and American—followed him pretty much everywhere he went. He called Russian intelligence “hardcore fans” while noting the somewhat ridiculous notion of American intelligence following a comedian around.

“You know who did know I was in Russia? Russian intelligence,” he said. “Hardcore fans, evidently. Followed me everywhere. Also got some attention from American intelligence. Couple guys seemed to pop up everywhere we went. But it’s important, keep your eye on a comedian while he’s in Russia doing jokes. I could be giving state secrets to the Russians. Oh wait, someone’s already got that covered.”

Colbert spent the bulk of his monologue discussing Donald Trump’s hypocrisy around the widely accepted belief that Russia interfered in the 2016 election. While Trump has stated he didn’t think Russia was involved, he now blames former President Barack Obama. And now Trump wants an apology.

And Colbert gave him one—sort of.

“You know what?” Colbert asked as the audience booed. “Look, I’m a big enough man to apologize. And I think I speak for the majority of Americans when I say, ‘I’m sorry you’re president.’”