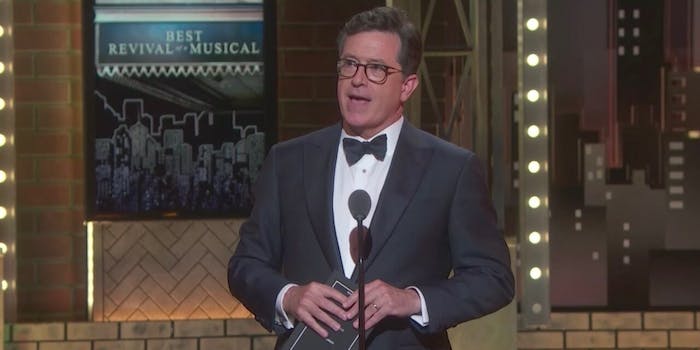 'This D.C. production is supposed to have a four-year run, but reviews have not been kind.'

Stephen Colbert makes jokes at President Donald Trump’s expense on The Late Show daily, but last night he took some of his showstopping zingers straight to the Broadway stage.

He appeared on the Tony Awards Sunday night to present the award for Best Revival of a Musical, and as he set up his own category, he compared Trump and his administration to a revived show in Washington, D.C. that originated “way off-Broadway, over on Fifth Avenue.” Except, according to Colbert, that production hasn’t been received as kindly as the three shows nominated for Best Revival of a Musical.

“A couple of problems: the main character is totally unbelievable, and the hair and makeup, yeesh,” Colbert said. “This D.C. production is supposed to have a four-year run, but reviews have not been kind. Could close early. We don’t know, we don’t know. Best of luck to everyone involved.”

Colbert’s comparison of Trump received thunderous applause from the audience, although some of his other comments, including a comment regarding Miss Saigon, Trump, and pageant locker rooms, didn’t land as well.

You can also view the entire segment—which includes Colbert announcing the eventual winner, Hello, Dolly! and the acceptance speech from producer Scott Rudin—below.