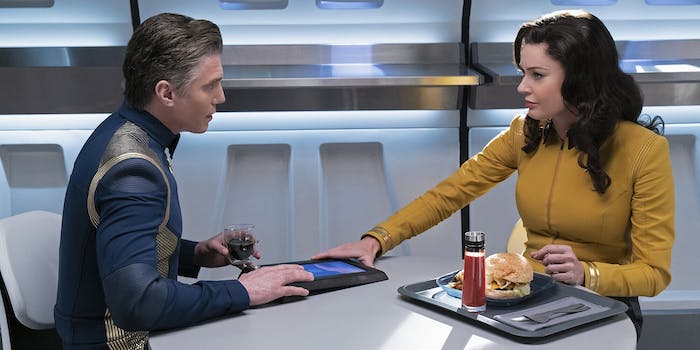 The series will focus on the Enterprise crew before Kirk.

Anson Mount, Rebecca Romjin and Ethan Peck will reprise their roles from Discovery‘s second season, playing Captain Pike (Kirk’s predecessor on the Enterprise), his second-in-command Number One, and Spock. Pike became a fan-favorite character as Discovery’s temporary captain in season 2, with Anson Mount praised for his upbeat, wholesome performance—a welcome change from the first season’s darker tone. In Star Trek‘s original 1960s pilot episode, Pike was the captain before William Shatner was cast as Kirk, an idea that was later written into the Enterprise’s canon backstory.

While Number One only had a minor role on Discovery, she appeared in a couple of CBS’s Short Trek minisodes, acting as a kind of tester pilot for a potential spinoff with Pike’s Enterprise crew. Writing for the new show is already underway, with a series premiere written by Akiva Goldsman, Alex Kurtzman, and Jenny Lumet of Star Trek: Picard, who will also serve as executive producers.

This is the fourth live-action Star Trek show at CBS All Access—fifth if you include the Short Treks anthology stories. The others are Discovery, Picard and an upcoming Section 31 spinoff starring Michelle Yeoh, along with two animated series: Lower Decks (aimed at adult audiences) and an as-yet-untitled show for kids. The franchise is expanding rapidly—but only for people who subscribe to CBS All Access, which is still a tall order for many fans.

Discovery‘s second season ended on a convenient note for this spinoff, with the main crew jetting off into the future and leaving the Enterprise behind. That means Pike, Spock and Number One have a sandbox of eight or nine years to play around in before they catch up with the first year of Star Trek‘s original 1960s timeline.