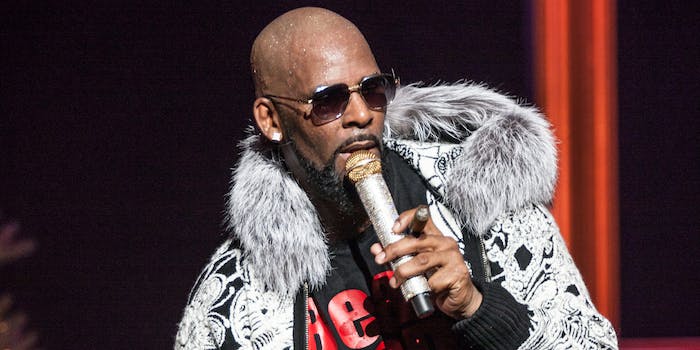 Spotify removes R. Kelly from all of its official playlists (updated)

Kelly has been accused of sexual misconduct for decades, with a steady stream of women speaking out over the years about his sexual violence. Most recently, he was accused of running a “sex cult” for underage women from his home, with two additional women stepping forward to BuzzFeed just this week with their stories. Little has been done legally to address the accusations, but in the current Me Too climate, it seems these women’s claims may at least finally be starting to get taken seriously on the business side of Kelly’s life. The Women of Color (WOC) branch of Time’s Up announced earlier this month that they were joining forces with the #MuteRKelly movement to generate some attention for the cause—and Spotify seems to have taken notice.

The singer’s library will still be available to Spotify users who search for his name, but his music will no longer receive additional promotion by the streaming service. In other words, if you want to listen to “Ignition (Remix)” or some future single, you’ll still be able to track it down—it just won’t be featured on flagship playlists like RapCaviar, Discover Weekly, or New Music Friday. On top of that, his songs have been stripped from the service’s other genre- and mood-based playlists.

In an announcement Thursday, Spotify explained the decision is part of a new company-wide public hate content and hateful conduct policy.

“We don’t censor content because of an artist’s or creator’s behavior, but we want our editorial decisions — what we choose to program — to reflect our values,” Spotify told Billboard in a statement. “When an artist or creator does something that is especially harmful or hateful, it may affect the ways we work with or support that artist or creator.”

The hateful conduct provision is only one part of the new policy, which also includes a provision for hate content. Spotify made a point to acknowledge that there are different cultural standards for what might be considered offensive in different regions around the globe — the service is available in over 50 countries worldwide — but the streaming giant has partnered with several advocacy groups to develop its definition of hate content. The company reportedly consulted with the Southern Poverty Law Center, the Anti-Defamation League, Color Of Change, Showing Up for Racial Justice (SURJ), GLAAD, Muslim Advocates, and the International Network Against Cyber Hate while forming the new guidelines, which take effect immediately.

Update 11:21am CT, May 10: Rapper Xxxtentacion, who has a history of violence against women and was arrested for aggravated battery of a pregnant victim, will likewise no longer appear on Spotify’s official playlists. His music was on Rap Caviar as recently as Wednesday.