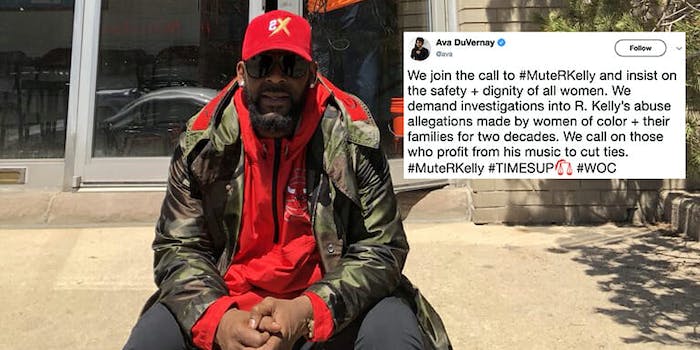 Time has long been up for the singer.

The Women of Color committee of the Time’s Up movement announced on Monday that they’re joining the #MuteRKelly campaign.

Originally started by Oronike Odeleye and Kenyette Barnes last year, the #MuteRKelly campaign is a response to the decades of sexual assault and abuse allegations against R. Kelly that seem to have had no influence on his career trajectory or his record deal with RCA Records. In an online petition, the campaign demands Sony drop Kelly and that Live Nation cancel his upcoming performances.

Kelly’s protracted fall from grace has sped up in the past year, jump-started by a BuzzFeed report last summer alleging the singer held several women in a sex “cult.” Most recently, Kelly has been accused by Dallas woman of knowingly giving her a sexually transmitted disease while they were in a relationship that began when she was 19. BBC3 illuminated similar accusations in a recent documentary, R Kelly: Sex, Girls & Videotapes, in which former girlfriend Kitty Jones claims the singer introduced her to a girl he had allegedly “trained” since she was 14 years old.

Following the new allegations, several key members of R. Kelly’s team have ceased working with the singer. Now, Time’s Up, the movement and legal defense fund designed to help women in various industries combat sexual harassment and abuse, has adopted the cause and issued a statement on Monday, urging for a better investigation into the allegations. The statement refers to the recent decision in Bill Cosby’s trial as a step forward in addressing the mistreatment of women of color in Hollywood—but it also insists there is a long way to go.

“The recent court decision against Bill Cosby is one step toward addressing these ills, but it is just a start,” the statement said. “We call on people everywhere to join with us to insist on a world in which women of all kinds can pursue their dreams free from sexual assault, abuse, and predatory behavior. To this end, today we join an existing online campaign called #MuteRKelly.”

The statement calls on RCA Records, Ticketmaster, Spotify and Apple Music, and Greensboro Coliseum Complex—the venue hosting a Kelly concert on May 11—to join the campaign and “insist on safety and dignity for women of all kinds.”

Members of the committee, including Ava DuVernay and Shonda Rhimes, as well as other celebrities, tweeted about the campaign.

Today we join the call to #MuteRKelly #TIMESUP

We join the call to #MuteRKelly and insist on the safety + dignity of all women. We demand investigations into R. Kelly’s abuse allegations made by women of color + their families for two decades. We call on those who profit from his music to cut ties. #MuteRKelly #TIMESUP #WOC pic.twitter.com/TYmDRVIH00

We join the call to #MuteRKelly and insist on the safety + dignity of all women. We demand investigations into R. Kelly’s abuse allegations made by women of color + their families for two decades. We call on those who profit from his music to cut ties. #MuteRKelly #TIMESUP  #WOC https://t.co/RTco2ZeetZ

When R Kelly is finally taken down it won't be because of white women,white feminists,Black men or any men,it will be because of Black women, many who will never be named but some of us know the truth and we won't allow our sisters efforts for over 15 years be erased #MUTERKELLY

We join the campaign to #MuteRKelly. We're calling on corporations to cut all ties with R. Kelly and insist on safety and dignity for women of all kinds. @RCARecords @Spotify @AppleMusic @Ticketmaster #MuteRKelly #TIMESUP #WOC pic.twitter.com/ON9EkbpumD

The ladies of #muterkelly have been protesting his concerts & got some shut down. It’s not just about him but all the abuse in our communities. R Kelly is up in our churches & families! [email protected] is my contact. @begirl_world is my org. Here to help your efforts too.

“We demand appropriate investigations and inquiries into the allegations of R. Kelly’s abuse made by women and their families for more than two decades now,” the statement ends. “And we declare with great vigilance and a united voice to anyone who wants to silence us—their time is up.”