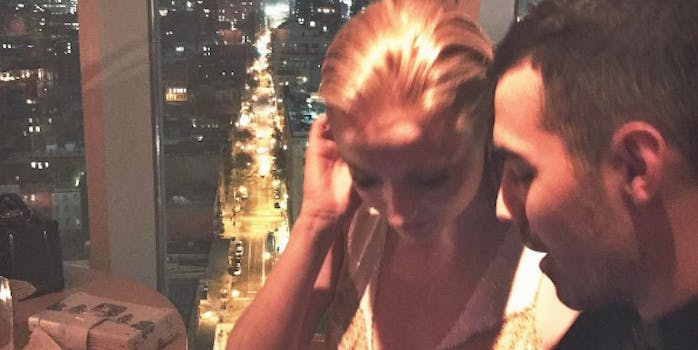 In what appears to be a simultaneously-timed announcement, Sophie Turner and Joe Jonas surprised fans by Instagramming an engagement photo Sunday.

The pair broke the news on their accounts with a photo of their hands (plus one new-seeming ring) and a simple caption: “I said yes,” for Turner, and “She said yes,” for Jonas.

The Game of Thrones star and the pop singer have reportedly been dating for just less than a year. They were first spotted canoodling at a Kings of Leon concert in the Netherlands and became “Instagram official” in January according to People. Since then, they have adopted a dog named Porky Basquiat, who now has a thriving Instagram presence.

The 21-year-old Turner revealed in July that she is “very happy” with 28-year-old  Jonas but expressed her frustration at the lack of privacy they have. “You do feel like you’re living in a fishbowl,” she told Marie Claire in an interview.

Given their private nature, the pair haven’t revealed any specifics about their nuptials, but as Vanity Fair points out, Game of Thrones season 8 will be shooting until summer of 2018 and Turner’s co-star Kit Harington has reportedly already asked production to be put on a brief hold next year so the cast can attend his wedding. So maybe the hiatus will be long enough for two weddings to squeeze in.

And honestly, a double Game of Thrones wedding—what could go wrong?