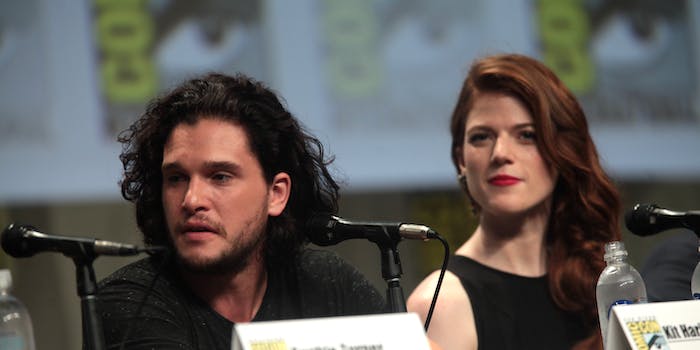 They're inviting a lot of 'Game of Thrones' actors!

Game of Thrones season 8 may have to take a break from filming next year so the cast can go to Kit Harington and Rose Leslie’s wedding.

The two Game of Thrones stars got together in 2012, when Leslie was playing Jon Snow’s short-lived love interest Ygritte. They announced their engagement last month. In a new interview on the Jonathan Ross Show, Harington made it clear that it would be a very Game of Thrones-friendly wedding—although hopefully not a red one. They’re inviting so many Game of Thrones actors, HBO will probably have to rearrange the filming schedule.

“I rang [a Game of Thrones producer] up, and I said, ‘I’m getting married, and it’s your fault, actually,'” said Harington. “I was like, ‘You need to factor in a Game of Thrones wedding, by the way.’ They have all got to be there, so the whole thing has got to shut down.”

After six years of filming and promotional tours, it makes sense that the Game of Thrones cast are close friends. We won’t be surprised if George R.R. Martin is invited to the wedding as well, in fact. In a weird way, he’s the couple’s matchmaker, and he seems like he’d be fun at parties.