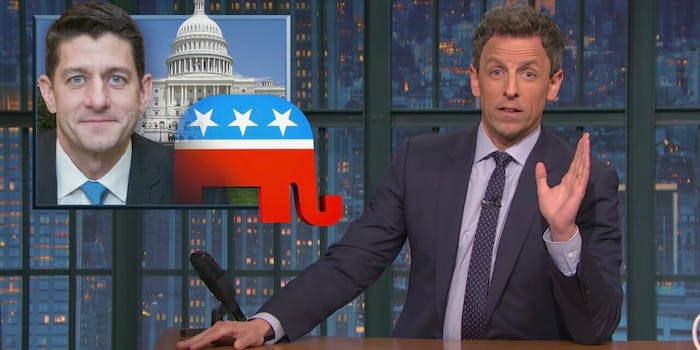 Late-night TV has tackled politics on a daily or weekly basis for months, but the segments are finally starting break through the Washington bubble.

Many heard Jimmy Kimmel’s call for the House to vote against the American Healthcare Act last week, which led Sen. Bill Cassidy (R-La.) to coin the “Jimmy Kimmel Test” and answer Kimmel’s tough questions on healthcare.

On the other hand, House Speaker Paul Ryan’s (R-Wisc.) office sent an email to Seth Meyers after seeing the Late Night host’s showcase on the AHCA and Ryan’s hypocrisy on healthcare.

Meyers opened his latest “A Closer Look” segment with a spotlight on the response—and the outrage—House Republicans have received since passing the AHCA. But Meyers took plenty of time to highlight the email Ryan’s office sent him because it took issue with how some of Meyers’ arguments were presented. Meyers invited Ryan on Late Night to discuss healthcare with him, but he didn’t let the House speaker off easy. Instead, he broke down the email line by line to demonstrate just how misleading Ryan’s comments were.

“Republicans rushed this bill through for ideological reasons despite the fact that every analysis shows it would cut taxes for the wealthy, raise premiums for older, sicker people, and kick millions off insurance,” Meyers said. “If they really wanted to solve our healthcare problems, they could start by looking, for example, to other countries like Australia, which has universal single-payer healthcare that insures everyone for a fraction of the cost.”