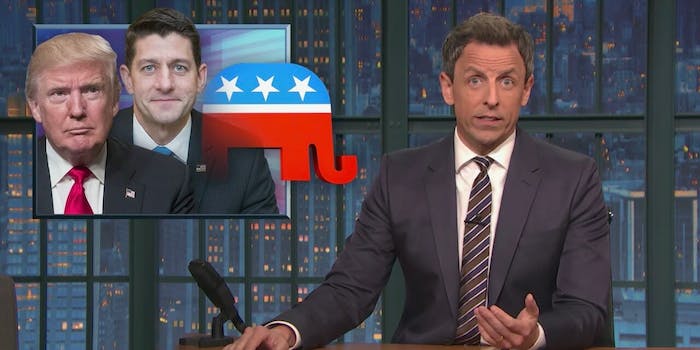 'I guess they’re just happy they finally passed something that wasn’t a kidney stone.'

The House of Representatives narrowly passed the American Healthcare Act Thursday, which would alter major aspects of Obamacare, and Seth Meyers is adding his voice to the wave of fury over Congress approving a bill that will leave millions without affordable health insurance.

The AHCA would cut funds for Medicaid, wouldn’t require insurers to cover pre-existing conditions, and would raise costs for the sick and the elderly while lowering them for the wealthy with a major tax cut. The AHCA is an even more extreme version of the bill withdrawn in March. And the GOP, looking for a victory, passed the AHCA without waiting for a CBO score; the score for the previous version of the AHCA estimated that 24 million would lose their insurance.

Even if the bill goes nowhere in the Senate or undergoes a major overhaul, the House GOP celebrated in the Rose Garden—and reportedly had cases of beer delivered to the Capitol—as many Americans feared losing access to affordable health insurance.

“Look how happy those old white guys are,” Meyers noted. “I guess they’re just happy they finally passed something that wasn’t a kidney stone. No longer covered, by the way.”

And the kicker is that despite it being one-sixth of the American economy, hardly anyone has seemed to read the secretive, inaccessible bill in full before voting on something that will affect millions.

Maybe someone like… Paul Ryan. As Meyers demonstrated with a series of old clips, Ryan in 2009 spoke out against everything 2017 Ryan and the House GOP eventually did in order to get the AHCA passed on Thursday. And people will remember that.

“Americans are being conned and there will be consequences for the people doing the conning,” Meyers said.