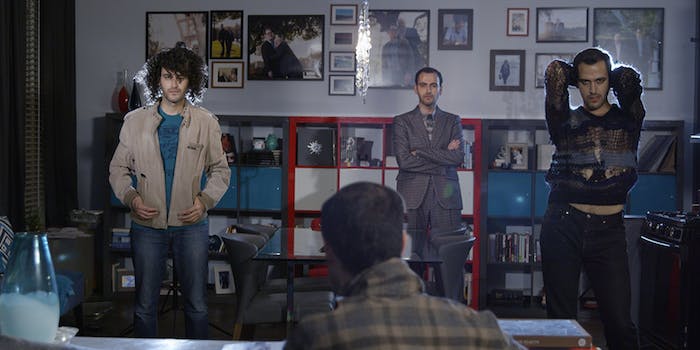 You need to watch the ‘Buffy’ alum-featuring queer webseries, ‘Self-Obsessed’

We have reached queer nerd nirvana.

Who hasn’t tried to chat up a guy at a party while he’s getting a hand job?

OK, maybe not everyone. But graphic novelist and filmmaker Sina Grace has, and it’s just one of the hilarious and awkward scenes in his new webseries Self-Obsessed: A super-gay, super-funny romp through one guy’s adventures in queer Los Angeles single life.

As if that wasn’t enough of a reason to become, well, obsessed with the new show, it also features Buffy the Vampire Slayer star Amber Benson in the best role we’ve seen her in since she played the lesbian teen witch Tara on the ’90s hit. Benson’s fellow Buffy alumnus Adam Busch (who played Warren, the creepy sex-bot maker) has a role too; and Jon Gabrus (Guy Code and Younger) is a bearded papa-bear delight as Grace’s ex-boyfriend Greg.

Grace told the Daily Dot that the webseries stays close to the graphic memoir it’s based on, an 80-page book released last summer by Image Comics. Both in book form and on film, Self-Obsessed is the true story of a terrible year in Grace’s life: When a death in the family, a breakup, and a book cancellation all piled on at once. “I basically shut down and had to start from scratch,” Grace told the Daily Dot. “And figure out how I was and what I was doing. … The webseries follows a heightened version of me as I navigate through the breakup and cancellation, and my seemingly endless flailing to find my artistic mojo.”

The first episode of Self-Obsessed hit YouTube on Tuesday, and already it fills an existing gap in television—where depictions of queer men living (and flailing) in artsy, punky subcultures don’t exactly dominate our screens. The series soundtrack features Los Angeles indie and punk bands like the Feels, Cold Showers, and the Exray’s, which lends a bouncy rhythm and tension to scenes where Grace’s eponymous lead character is trying to plow through his suffering with beer and sad attempts at hitting on hairy hipster lumberjacks with blue hair and flannel shirts.

Self-Obsessed just got described as: "It's like if Sex in the City and Broad City had a gay baby!" Thanks for getting me, @NotPatReilly

Despite his confidence-boosting mantra, “you’ll be balls-deep in man meat in no time,” the lonely desperation in the character is something anyone can relate to. After the breakup of a long-term relationship, sex and dating can feel like a foreign language you learned years ago and gradually forgot due to lack of use. And the abundance of alcohol that many rely on to get through tough times doesn’t always help—which is clear when Grace’s character is too busy barfing into a trash can to notice a text from his recent ex.

As the series progresses, viewers will get a taste of even more haphazard attempts at bouncing back from hard times, as Grace’s friends offer “excellent advice that goes in one ear and out the other.” In real life, one of those friends was Benson, who plays herself true to form as the confidant who supports Grace through his stumbles.

New episodes of Self-Obsessed debut every Tuesday for the next month on Sina Grace’s YouTube page. That’s a month full of anonymous bear-daddy sex, bad decisions, beer barf, and Buffy stars—and we couldn’t think of anything better.