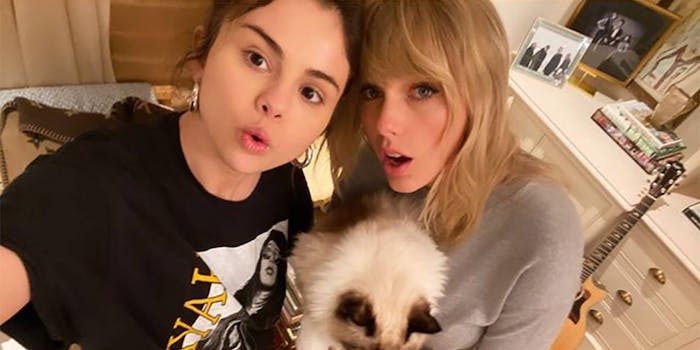 It turns out that there is such a thing as loyalty, at least for Selena Gomez.

Gomez praised Kim Kardashian’s Skims line of shapewear in an Instagram story on Monday, posting a bathroom selfie of her wearing the product with the caption,”Legit So freaking comfortable @skims.” Shortly after posting, she took down the ode to the form-fitting garment and replaced it with a photo of herself and Taylor Swift.

“My ride or die. I would die for this one” pic.twitter.com/ZxjWscYpOG

Why would Gomez want to replace something as innocuous as a shapewear shout-out with a nod to her friendship with Swift?

After she posted about Skims, fans reminded Gomez that that Kardashian and Swift have a longstanding beef. Cosmo makes a convincing argument that Gomez was pressured to delete the original post by Swifties, who have been the online foot soldiers in the feud.

“You know, even if Taylor is ok with Selena supporting Skims, I don’t have to be ok with it. That’s my decision,” one Twitter user wrote.

you know, even if Taylor is ok with Selena supporting skims, I don't have to be ok with it. that's my decision. pic.twitter.com/XcKeqcNcpP

“Why is Selena wearing Skims after Kim bullied Taylor publicly,” another asked.

Perhaps Gomez thought posting the Skims shout-out wouldn’t be taken as picking sides in the feud, and she felt the need to post a quick corrective.

The “Lose You to Love Me” singer captioned her Swift post, “My ride or die I would die for this one. Thank you for forever being by my side. You have taught me so much, walked through all of this with me, STAYED and you remind me to be a better, human being. I’m on your side for life.”

The feud between Swift and Kardashian dates back to the dark ages of 2016, when Kanye West shaded Taylor on his track “Famous” with the line, “I feel like me and Taylor might still have sex/Why? I made that bitch famous.”

Following the release of the song, Kardashian leaked a video of West calling Swift to ostensibly get her approval for the lyric—at least the first half. Swift maintains that West never informed her that he would refer to her as a “bitch” in the song. Three years later, it seems the bad blood between the two camps remains.

Gomez has been vocal about her friendship with Swift. The two became close at a time when they were each dating a Jonas Brother. In an interview with Beats 1’s Zane Lowe, Gomez said, “[Taylor] was frustrated when I was frustrated. She was sad when I was sad. But more than anything, my friends stood by my side when I think they visibly saw me in so much pain.”