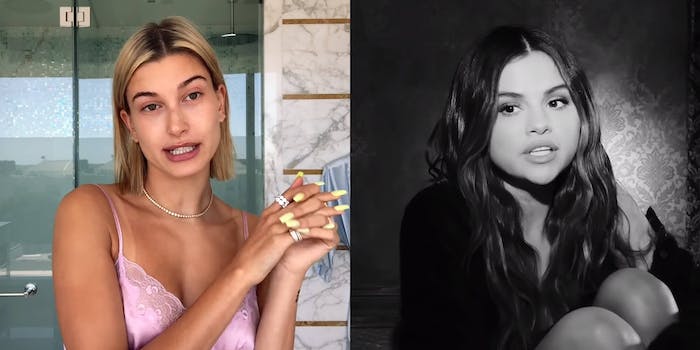 The post came shortly after Gomez released her latest song, 'Lose You to Love Me,' which details a toxic relationship.

It didn’t take long after the release of Selena Gomez’s latest hit “Lose You to Love Me” for fans to speculate who the ballad was about.

For those who haven’t yet listened to the song, the lyrics go something like this:

“In two months you replaced us / Like it was easy.”

“Now that chapter is closed and done.”

Unsurprisingly, everyone jumped to the conclusion that the song was about Gomez’s ex, Justin Bieber who proposed to model Hailey Baldwin (now Hailey Bieber) months after ending things with Gomez in 2018.

Most people were in their feelings. Others were giddy at the public shaming.

Twitter user @hikarren wrote: “If Selena wants to write about Justin Bieber, LET HER. She can heal however she needs to and wants to. Everyone deals with their own pain in different ways. Goodbye. #LoseYouToLoveMe”

Selena Gomez: “in two months you replaced us”.

But Bieber’s wife wasn’t vibing with the speculation. Shortly after Gomez’s song was released, she posted a picture of her playlist to her Instagram story featuring the song “I’ll Kill You” by Summer Walker.

And of course, everyone then assumed Bieber was indirectly shading Gomez.

“Selena Gomez released a song (stream for clear skin) about her life experiences w an ex and leaving him behind (Justin Bieber now married to Hailey Baldwin) and like 5 minutes later Hailey Baldwin posted this. It’s not the first time she’s shaded her and probably not the last,” Twitter user @Valeriosbarbie wrote.

According to a screengrab from Just Jared, Bieber denied that was the case. “Please stop with this nonsense… there is no ‘response’. This is complete BS.”

Gomez, of course, has stayed out of the drama for the most part and hasn’t publicly stated whether Justin Bieber is the sole inspiration behind her latest bop.

Still, we’re here for the drama.

“This song was inspired by many things that have happened in my life since releasing my last album,” Gomez said in a statement, per People. “I thought it was important to share the music, as I know many can relate to the fact that the road to self-discovery generally comes through the scars in one’s life.”

“I want people to feel hope and to know you will come out the other side stronger and a better version of yourself,” she added.