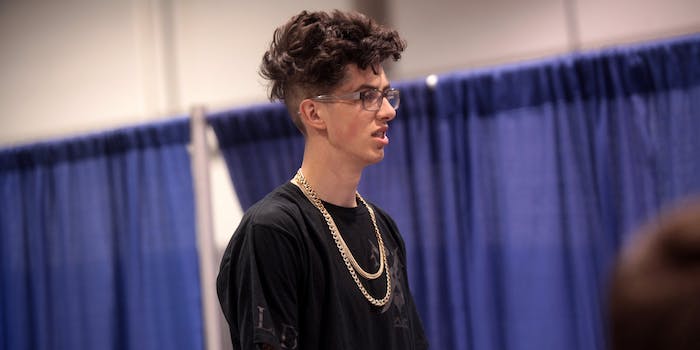 At least one anonymous YouTuber has accused the star of rape.

Sam Pepper, the YouTube prankster who came under fire this week for a video in which he pinched women’s behinds without consent, has officially been dropped by Collective Digital Studio, the multichannel network that represented him.

New Media Rockstars reported that less than a week after the offending video hit YouTube, Pepper had been dropped despite posting videos earlier this week claiming that the original video was part of a series he called a “social experiment” to raise awareness about consent and abuse. His video was met with disbelief from many fellow YouTubers and YouTube fans.

The news of his release from CDS—confirmed this morning by the Daily Dot—comes in the wake of many more accusations of Pepper having engaged in inappropriate sexual conduct with women in the U.S. and U.K. Dottie Martin, a British vlogger, posted a video to her channel on Tuesday describing Pepper’s aggressive advances on a past date. Another user, who has chosen to remain anonymous, posted a 15-minute video Wednesday describing her encounter with Pepper that she says included non-consensual sex. (Warning: This video contains content that may be NSFW or triggering to some viewers.)

Meanwhile, Laci Green, the sex-positive YouTuber who spoke out against Pepper and penned an open letter cosigned by other notable YouTube users asking for an apology from the creator, tweeted this week that Pepper has been sending her harassing emails.

Another kind email from @SamPepper. You don’t scare me dude. I know what you’ve done, and soon YouTube will as well. pic.twitter.com/DXIIVzi40Q

After some discussion on Twitter regarding the legality of free speech in relation to sexual harassment claims, Green posted a video discussing the controversy and some of the allegations and information she’s heard from people claiming to have been harassed and violated by Pepper in the past.

Pepper claims that someone is spoofing his unused email address, but he has yet to address any of the sexual allegations against him or comment on his MCN having dropped him from their roster.

A PR representative for Collective Digital Studio confirmed Pepper’s release, but said the network had no further comment.

Pepper is not the first YouTuber to be embroiled in a sexual abuse scandal. In March, several prominent YouTubers including Alex Day and Tom Milsom came under fire for accusations of abusive and coercive relationships, often with underage fans.