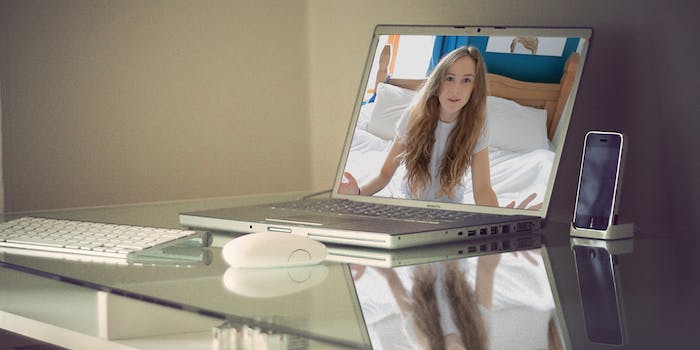 It's the latest controversy to hit the prankster this week.

Just hours after calling the prank video in which he grabbed girls’ butts a “social experiment,” popular YouTuber Sam Pepper has been accused of assaulting a female vlogger.

The accusation comes from Dottie Martin, a British vlogger on YouTube known as thisbedottie. She posted the video, titled “A Cautionary Tale,” Tuesday to her more than 54,000 subscribers, noting to her Twitter followers that she was pretty nervous about posting it.

Martin started out her story—one she said she had never planned to tell—in general terms. She went to a popular YouTuber’s meet-and-greet about two years ago when she was 16, and he invited her to the movies later on. While there, they kissed, and when he tried to push things further, she pushed his hands away; allegedly, he then tried to put her hands on his body, and again, she pulled away. When she called him out on it later, he accused her of tricking him, suggesting that she owed him something.

“It suggests that one, I had agreed to do anything more than go to the cinema with him; two, because I let him kiss me he was entitled to do anything else; and three, that his niceness only lasted as long as I held sexual promise,” she said.

At the end of the video, she reveals the YouTuber in question is Pepper, who was 23 at the time. He had taken advantage of her as a minor and a fan, she explained, and she felt she had a responsibility to share her story so that it doesn’t happen to anyone else.

It’s just the latest controversy for Pepper this week. Many prominent members of the YouTube community signed an open letter to Pepper to remove his prank video (which was eventually removed from YouTube for violating its “policy on nudity or sexual content”) in which he appears to be sexually assaulting women, and he was banned from attending Playlist Live and VidCon. His apology video, where he calls the prank video a “social experiment,” rubbed many the wrong way.

The YouTube community, which came out in support of the girls and women who accused YouTube musicians Alex Day, Tom Milsom, and about a dozen others in March, is stepping up again for Martin. Some of the comments are defending Pepper, but the majority of them are showing their full support.

Please listen to my friend @thisbedottie‘s experience. Sam Pepper does not support women. He sexually assaults them. https://t.co/9ZnlIvsYio

I’m extremely angry that ANYONE would have to go through this, let alone @thisbedottie who’s one of my best friends https://t.co/pzTAZr2n3Y

@thisbedottie Thank you for your bravery.

Regardless of your current position on @sampepper, please watch this video by the fantastic @thisbedottie: https://t.co/Xy4FU4AZxl

Make sure to send as much love and support to @thisbedottie today. The internet can be a scary place, and we have to protect our own.

Martin is touched by many of the comments she’s received from followers.

Twitter won’t show me all of the tweets and support I’m getting but thankyou so much. I’m speechless.

We’ve sent Collective Digital Studio and Pepper a request for comment, and we’ll update if we get a response.

Update 4:51pm CT, Sept. 23: This version of the story has been updated with additional details about the alleged impropriety.