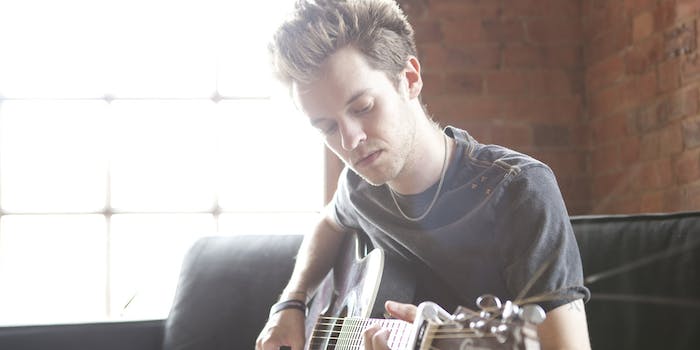 Since the abuse accusations against YouTube star Tom Milsom came to light earlier this week, several other Internet personalities have been implicated by similar posts on Tumblr, painting a disturbing portrait of the potential dangers of YouTube celebrity culture.

One of the biggest blows to the community was Alex Day’s admission on Thursday night that he’d been involved in manipulative and potentially abusive relationships with women. Day’s one of the most well-known artists on DFTBA Records, the YouTube music label from John and Hank Green. He asked in the post for his merchandise to be removed from the label’s store.

“It’s only in the last 24 hours that I’m realising how much I created situations that put people under enormous pressure,” Day wrote. “I wasn’t being responsible enough to be aware of it, and that’s my fault entirely. I want to be clear that I’m not blaming this on my lack of awareness or knowledge of consent and boundaries. I’m blaming myself. I’m deeply, deeply ashamed of this.”

Just one day after Day posted publicly about the dangers of the power imbalance between YouTube creators and their fans, several women came forward to say that he’d treated them in a way that fit a pattern of manipulative behaviour towards his female friends and fans.

For those who felt that they knew Day through his social media presence, this type of accusation was difficult to believe. But as YouTuber Anthony D’Angelo pointed out in a video, watching someone’s videos and interacting with them as a fan is not the same as knowing them on a personal level. Their online persona is their professional brand, and 10 minutes of edited YouTube footage per week is not a window into the soul.

On Wednesday and Thursday, when only one or two anonymous bloggers had spoken out about their experiences with Day (as opposed to the 11 women who have come forward as of Friday night), most commentary on social media seemed doubtful, at best. Who was to say that these people weren’t just looking for attention? Particularly since similar posts against other famous YouTubers had just been debunked as outright trolling. The logic seemed to be that Day was clearly a nice guy.

prominent YouTuber admits to manipulating people & doing things to them without their consent. all the notes are messages of support FOR HIM

it’s amazing too that now Alex Day claims he DOES know that no means no. when I said “I don’t want want to kiss you” he took it as a ‘yes’.

One of the many difficult realizations of the past few days is that no matter how close you may feel to your idols, you do not know them. This may seem like a no-brainer to anyone who is used to fandom in the traditional sense of fans looking up to unattainable idols like Beyoncé or Justin Bieber, but when it comes to YouTube fame, the lines between celebrity and fan are blurred.

In the early days of the community that now combines DFTBA Records, popular Nerdfighter vloggers, and Internet celebrities, there was very little separation between creators and viewers. But with over a million YouTube subscribers, the Alex Day of 2014 is simply not on the same level as your average 15-year-old fan—particularly since the biggest names on the scene have obviously grown up, while newer, younger fans keep joining their audience every day.

Whether he and Tom Milsom realized it or not, they had gone from being popular members of a relatively egalitarian Internet community, to being celebrities who had genuine influence over their fans and followers. Influence that could be warped and misused to the point where potential victims didn’t feel able to speak out until several others had come forward to back them up.

Although there are varying levels of severity in each of these cases, the accusations against Day and Milsom share a few basic similarities with other examples of alleged abuse in the YouTube community by Ed Blann (Day’s former friend and bandmate) and Mike Lombardo. In every case, young (often underage) girls became friendly with their online idols and ended up involved in reportedly abusive, coercive relationships that only came to light after other women came forward to share their own stories.

“I’m just thinking about all the negativity that has surrounded ‘Fangirls’ over the last few years and how it resulted in YouTubers trying to protect each other from them when in fact it should have been the ‘Fangirls’ who needed protection and support,” wrote carolineflinders on Tumblr. Other bloggers have called for DFTBA Records to introduce some kind of education program to teach popular YouTube musicians and content creators the realities of their relationship with their fans.

In the middle of all this, many people are looking to vlogbrothers Hank and John Green for guidance. Hank Green’s latest vlogbrothers update was a video about consent, finishing with an announcement that he was working with a group of Nerdfighters to create a taskforce to work against abuse and assault. They will also be working on a series of videos about consent and abuse, specifically relating to Internet relationships. The fact that Hank Green is putting their new taskforce in the hands of abuse and assault survivors is certainly a step in the right direction, and a good example to others of when to step back and allow others to speak instead.

Still, the YouTube community may have to face the possibility that this is a wake-up call about rape culture within their social circle and the permeable fourth wall between viewer and creator. Contrary to the utopian ideals of early YouTube culture, perhaps it isn’t possible for popular vloggers and their fans to interact on equal footing after all.