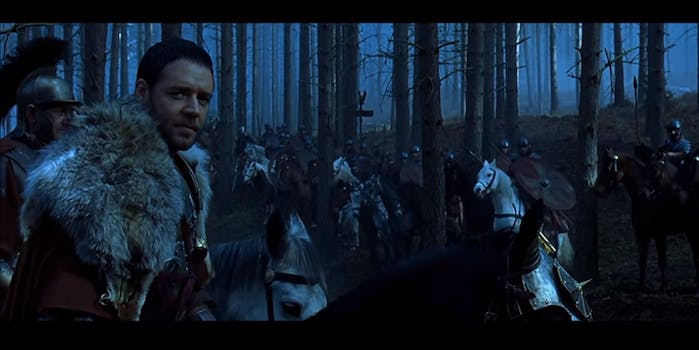 Russell Crowe loves his horses. Particularly the horses that he has worked with on-screen.

In a Tuesday morning tweet, Crowe recalled that George, the horse upon which he gave his iconic Gladiator speech in the woods before battle, was also on the set of Robin Hood years later. “We would have a chat everyday [sic],” Crowe wrote.

This is absolutely true . There’s a horse George who I gave the speech in the forest in Gladiator on. Years later he was on the set of Robin Hood and we would have a chat everyday.
Same with the white horse Rusty in Robin Hood we chatted again on Les Mis. Lifelong friends. https://t.co/LqUxyfAymK

“Same with the white horse Rusty in Robin Hood,” he continued. “We chatted again on Les Mis. Lifelong friends.”

The heartwarming love story between man and horse(s) came from a report about a horse recognizing Liam Neeson from a previous film. “He whinnied when he saw me. And pawed the ground,” Neeson told Page Six on Monday.

this is the love story our generation deserves https://t.co/38Ye8M5Rhs

These charming horse stories are, as author Anne T. Donahue put it, “the love story our generation deserves.”

Crowe’s been active on Twitter recently, sharing thoughts and scoring relatability points. Last week he paid tribute to Mad Max actor and disability activist Quentin Kenihan, who died suddenly on Saturday. He likewise retweeted an Australia tourism video and an online petition against changes to the Sydney Opera House on Tuesday.

He also retweeted this plea for help finding a lost chocolate lab:

I've lost my 13 year old chocolate Labrador an hour ago visiting my elderly mum in Shrewsbury. 'Moose' went missing in the area of Copthorne Road/Copthorne Park. If anyone see or hears of a lab on his own, please call me 07503 939055. Thank you.